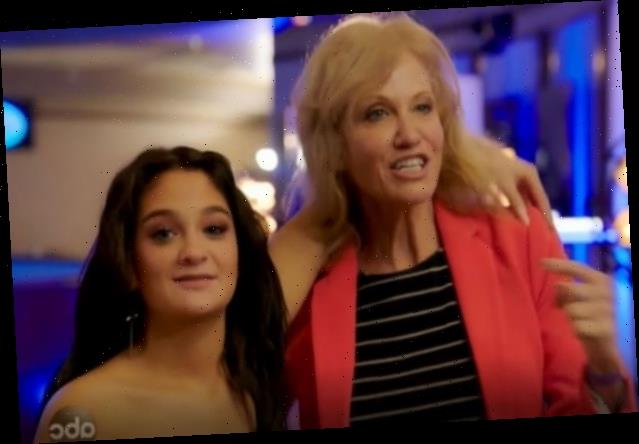 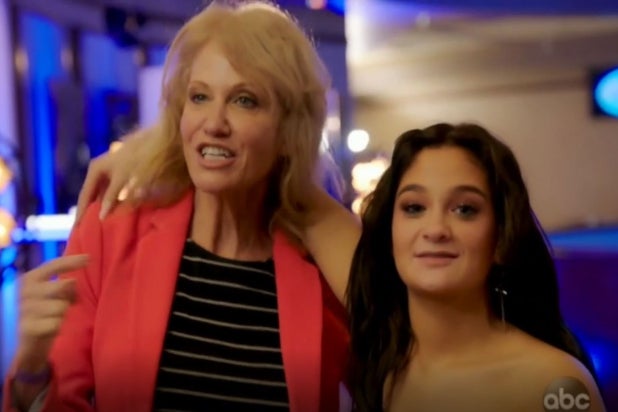 Kellyanne Conway’s daughter Claudia Conway made it to Hollywood on this season of “American Idol,” and Kellyanne was all smiles and support for her kid in a recent episode, despite Claudia’s recent viral accusations that her mom abused her and purposefully leaked her topless photos online.

Before Claudia’s performance of Bishop Briggs’ hit song “River,” she filmed an introduction with Kellyanne, who was in the audience while her daugher performed. Claudia’s dad, Lincoln Project co-founder George Conway, wasn’t present.

“It’s OK for you to have different views than the people you love,” Claudia said in the introduction segment, referencing the fact she’s been an outspoken critic about her mom’s political stance and work as a senior advisor to former President Trump for years. Claudia also might have also been referring to her mom’s attempts to critique her singing — later in the video, Kellyanne tries to tell Claudia her singing sounds flat, while Claudia rolls her eyes and says “you stick to politics, I’ll stick to music.”

Even worse than the awkward “Idol” segment where Claudia and Kellyanne sit poolside and fist-bump before the performance was what came after —  when Kellyanne decided it’d be a good idea to briefly cover Alicia Keys’ “Girl on Fire” to celebrate Claudia moving on to the next round.

Claudia’s alto rendition of “River” wasn’t half-bad, and the “American Idol” judges gave her the go-ahead to progress to the next round. When she left the stage, Claudia was immediately love-bombed by Kellyanne, who gave her a hug.

“She thinks I can’t sing,” Kellyanne said to Claudia before launching into the first few bars in the chorus of Alicia Keys’ “Girl on Fire.” Claudia promptly turned away from the camera, halfway shielding her face with the typical teenage “Oh my god, Mom, you’re embarrassing me” expression.

Some viewers were quick to point out Kellyanne’s apparent change of heart. “@AmericanIdol is absolute garbage for making Claudia Conway say what she said about her family with different beliefs when we have heard how she actually feels and how they treat her. STOP SHOWING KELLYANNE IN A GOOD LIGHT #Idol,” one viewer observed.

Yes, it was cringey, and yes, the entire video might make viewers wish they could travel back a minute or so in time before they’d even seen Kellyanne try to sing. But it’s also incredibly ironic that Kellyanne chose an Alicia Keys song to belt out, because Keys has been a longtime supporter of the Black Lives Matter movement and very vocal critic of Trump’s former administration, including calling him a “fraud.”

During her performance at the Grammy Awards last year, Keys argued the U.S. should replace Trump with her fellow musician Cardi B — “Commander in chief impeached, y’all get out. Let’s bring Cardi B in,” she said.

TMZ has the full “American Idol” clip, including Conway’s brief bit of song. Check it out here, at your own risk.