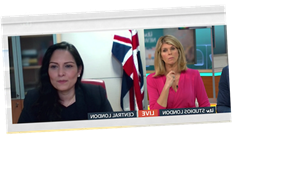 The Home Secretary appeared on the ITV show on Thursday and said there are "over half a million" doses of the Oxford/AstraZeneca vaccine going out today.

However, Kate wasn't convinced as she pressed Patel if that was true and if more would be going out tomorrow and later in the week.

Priti Patel said: "My understanding is that, with the AstraZeneca vaccine, there are over half a million doses of the vaccine that are going out right now, so that's to vaccination hubs, GP centres, but also hospitals…"

Patel replied: "So that's now. That's absolutely now, then of course going up and up and up, because AstraZeneca are accelerating the way they're producing that vaccine and getting it out."

Priti answered: ""I can't tell you how many we've got going out tomorrow because obviously we're getting vaccines that are being certified constantly by the authority that does the certification and then does the distribution, so I can't tell you about tomorrow and the day after.