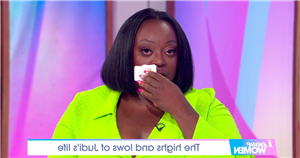 Judi Love became overcome with emotion on today's Loose Women, Wednesday 24 August, as she told her ‘Life Before Loose’ story.

Judi, 42, joined the Loose Women panel in 2020 and, alongside hosting the popular daytime TV show, the mum-of-two is a stand-up comedian, radio presenter and OK! columnist.

While Judi's created a successful career for herself, things haven't always been smooth sailing as she opened up about the hardships she faced as a child – including becoming a carer for her mother after she had a brain aneurysm when Judi was just nine years old.

She also spoke about how her mother’s illness inspired her career in social work and then comedy.

After a montage of photos of Judi through the years was played, she got emotional and said: ”It’s overwhelming, it’s joyous tears… when you’re living in the journey and so busy doing it and so focused on where you want to get to, that you kind of park things where they are, where they have been because you’re on a new path, so seeing it all back, you remember the process, you remember the tiredness, the joy, the hurt, the laughter, the people, so yeah, that’s what it’s done.” Speaking about the moment her mother had an aneurysm Judi said, “I was there when it happened. My mum’s doing what she does so well, which was cooking at the time, making cakes for a summer fete I had in school and she was just like… she doesn’t feel well, I remember her calling me and then she started to pray and I knew something was wrong.”

She added, “It was so weird, I was running out of the house – we had these [new] Wellington boots, but money was tight and she was like, ‘You can’t wear them until the end of that summer’…

"In that moment of not knowing if my mum could pass away, I saw these Wellington boots and I’ll never forget, I put them on and I ran outside and I went to a lady at the top of the road – my mum used to look after her daughter, and they came in and saw my mum was in a bad way and they kept me in the front room.

"Then my dad [who wasn’t living with us at the time] turned up and I was like, ‘Something is wrong’. He looked so nervous.”

She then recalled that her "strong, powerful" mum had to go into intensive care where she had to be resuscitated and rehabilitated, and Judi didn't see her for four weeks after the aneurysm struck.

Judi explained how she used comedy as a way of escaping her trauma, as she said: “I was a chubby girl and for me, that came from trauma. When I was at school, being popular was making everyone laugh, facial expressions and just being about that vibe and that got me through. Comedy was a way of me navigating through emotions I was feeling.”