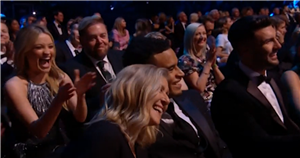 Love Island’s Toby Aromolaran got told off live on TV at the National Television Awards by host Joel Dommett as he put his arm around Joel’s mother.

As Joel took to the stage to introduce the show, he celebrated the lifting of lockdown restrictions as they were in a “real room” with “real people”.

He then welcomed viewers at home and the celebrities that filled the room, before pointing out that his mother was in the audience seated next to Toby.

He said: “Welcome to the millions of you watching at home, the thousands of fans here tonight, the hundreds of TV’s biggest stars and my one mum, sat with the cast of Love Island.”

As the camera cut to his mother and pulled out to reveal she was sat next to Toby, Toby cheekily put his arm around Joel’s mother as she leaned in to him.

Toby and his Love Island partner Chloe Burrows were the first of the Love Island cast to hit the red carpet prior to the event.

The pair spoke to OK! on the red carpet as they arrived at the venue, with Toby saying that life following their time in the villa was “very different”.

"You're in one reality and thrown into another," he said. This reality is a good reality."

The pair were there for their first red carpet experience, with Toby saying they’re “leaning on each other” while there.

"You know what, we're both in it together," he added. "We're leaning on each other, she's supporting me, I'm supporting her. It makes it even easier."

Chloe said: "I'm really grateful we're together and to be going to all these things.

"You're in the unknown, but at least you've got someone you can relate to."

Chloe and Toby had made it to the final on Love Island after winning audience hearts with their affection for each other.

The pair came second on this year’s season of the show, with Millie Court and Liam Reardon winning the grand prize together.

For the latest NTA and islander news, sign up to OK!'s daily newsletter.