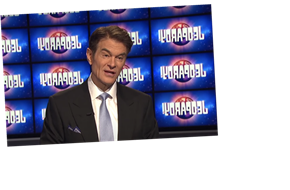 Dr. Oz started his “Jeopardy!” guest hosting run this week, much to the outrage of fans and over 500 former contestants of the prolific trivia game show. Toward the end of February when it was announced that Dr. Oz, Aaron Rodgers, Katie Couric, Dr. Sanjay Gupta, and more would take over “Jeopardy!” hosting duties following Alex Trebek’s passing, hundreds of former “Jeopardy!” contestants published an open letter on Medium (via New York Post) condemning the decision to bring Dr. Oz on board.

“When we heard that Dr. Mehmet Oz was slated to be a guest host, agreement came quickly — we were opposed,” the contestants wrote in their letter. “Dr. Oz stands in opposition to everything that Jeopardy! stands for.”

“Throughout his nearly two decades on television he has used his authority as a doctor to push harmful ideas onto the American public, in stark contrast with his oath to first do no harm,” the letter states. “These ideas include promoting supplements that do nothing, legitimizing gay conversion therapy (which is banned in California, as well as 19 other states), dangerous ‘cures’ for autism, and, most recently, the use of hydroxychloroquine as a treatment for COVID-19…None of these things is backed by any scientific fact and by promoting them he is actively putting his viewers in danger.”

The contestants also used the letter to remind viewers that Columbia Medical School faculty published an open letter in 2014 calling for Dr. Oz’s removal from the school’s program. Dr. Oz was teaching at the prestigious med school at the time.

Now that Dr. Oz’s “Jeopardy!” episodes have started to air, television viewers have joined the former contestants in slamming the current guest host (via Entertainment Weekly). As reporter Yashar Ali wrote on social media, “So ‘Jeopardy’ has Dr. Oz, who spreads dangerous pseudoscience, guest host but they have yet to book [Laura Coates as] guest host. Before he died, Alex Trebek told [TMZ] that Laura would be his pick for a woman host of ‘Jeopardy.’”

“‘Jeopardy!’ is known for being incredibly rigorous; a well-deserved reputation,” the contestants’ letter reads. “As contestants, we’ve all seen what happens behind the scenes if there’s any doubt about a question. We’ve seen writers and judges frantically cross-reference answers in real time to make sure that the facts are accurate. To then invite Dr. Oz to guest-host is a slap in the face to all involved.”

Dr. Oz is scheduled to host Jeopardy!” through April 2.