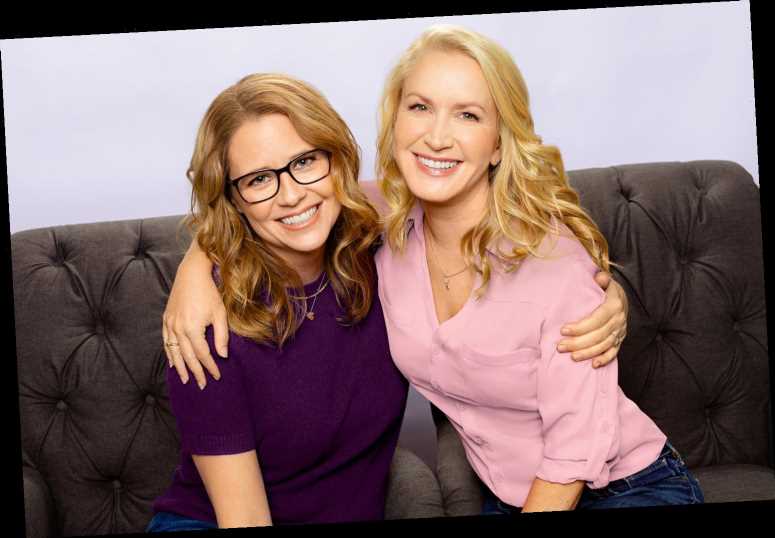 Fans of The Office are clamoring for more lore from the hit show, 15 years after it premiered on NBC.

Former costars Jenna Fischer and Angela Kinsey have been fulfilling this need, first with their award-winning podcast Office Ladies and now with their upcoming book, Office BFFs: Tales of The Office from Two Best Friends Who Were There — which includes their most "personal" and hilarious anecdotes yet.

"The book is our opportunity to be even more personal and it's also our opportunity to bring visuals to our stories," Fischer, who played Pam Beesly, tells PEOPLE in a joint interview with Kinsey, who starred as Angela Martin on the series. "We journaled all through The Office about everything. So, we're able to go back and track the journey of both our friendship and of our time on the show."

"It's our friendship as we've navigated through all these years, living in Hollywood and beyond," adds Kinsey, 49. "I am really excited to share it and also I'm excited for my daughter to have this book. I don't want to forget any of this stuff."

Office BFFs, which will be published by Dey Street Books in 2022, is an extension of the best friends' podcast. The book is an exploration of their almost two-decade bond, following them from co-stars and new moms to podcast co-hosts. They share behind-the-scenes looks at the making of their favorite episodes, what it was like to work with their beloved Office costars like Steve Carell (who played Michael Scott) and John Krasinski (who played Jim Halpert), and their lives now.

The two women tell PEOPLE how they first became friends (it involves sitting on a bench for hours onset) and reflect on some of their favorite memories, if Jim and Pam would still be together today and more.

Fischer says that she and Kinsey had been friendly during season 1 of The Office, but it wasn't until they sat on a bench "for two full shoot days, which is about 12 hours each day" during the filming of the "Basketball" episode that they really bonded. By the end of the shoot, they had told each other their "life story," says Fischer, 46. "We were leaving the warehouse and we were so giddy," she says. "We had this really fun friendship. You don't expect to make a friendship like this when you're older."

The day became even more epic when they encountered Carell.

"We had to walk through this big parking lot, and it was at night. Like school girls, we linked arms and started doing Schlemiel and Schlimazel from Laverne & Shirley and Steve was walking up behind us," Fischer remembers. "We were so embarrassed and we were laughing. Steve was like, 'No matter what happens, this is what you'll take with you. This.' And he pointed at the two of us. He was so right."

Since then, Fischer and Kinsey's friendship has been going strong.

"Jenna is my life anchor because it's like, the world doesn't make sense until I can bounce it off her, whatever happens," says Kinsey. "The big things, the small things. Once I tell it to her, I'm at peace with it, or I can navigate it."

Fischer explains that the key to their longstanding friendship is "listening."

"You just need that person who makes you feel seen and heard. That person who helps you process even little decisions when you're standing in Target. Who do you call to tell you if you need another throw pillow or not, you know?" she jokes.

And they're able to successfully produce Office Ladies together because they "balance" each other and they have the same values, including prioritizing family. (For each installment of the podcast, the women rewatch an Office episode and provide commentary.)

"What's great is that we can put our values into how we do business. And we have a shorthand because we're best friends," says Fischer. "So when Angela is blowing up my phone at 11:30 at night, or when I'm blowing up her phone at 7:15 in the morning because we get inspired at different times, we can text back, 'Lady, I'm not listening to this until tomorrow. But fire away.' " For Kinsey and Fischer, talking about the fun times on set never gets old, especially because fans are so eager to learn everything they can.

The Office fan base is huge — and includes celebrities. In October 2019, Chrissy Teigen sent Twitter into a spiral after she asked about the fate of Pam and Jim. After 10 years, were they still married?

"I am positive that Pam and Jim are doing very well and Cece and Phillip are growing up into fine, fine little people," Fischer says.

"I think I've had six more Schrutes," says Kinsey, projecting about Angela and Dwight's kids. (Dwight Schrute was played by Rainn Wilson). "I feel like Dwight and I are raising a small little army of Schrutes."

Continues Fischer: "No, I think the move for Pam and Jim was great for them because they were able to invest a little bit more into the types of things that really give them meaning in their life. They're very happy. Don't worry."

But Kinsley admits that working the show has had some not-so-favorable lasting effects.

While Kinsey isn't uptight like the character she portrayed, she jokes that her "resting face" has forever been changed thanks to her character. Case in point: A few years ago, Kinsey attended a friend's wedding in Las Vegas and was having a great time.

"I hop in the elevator, I'm really happy, ecstatically happy. And this elder gentleman gets in the elevator with me and he looks at me and goes, 'Oh honey, it's going to be OK.' I said, 'What?' " Kinsey recalls. "And I looked at my reflection in the mirror and I have that frickin' Angela Martin scowl on my face. I thought, 'Oh my God, this has become my resting face.' Nine years of scowling and this is my go-to resting face. Even when I'm happy."

Kinsey explains that rewatching The Office for the podcast has stirred up powerful memories from filming for both of them.

"We're rewatching the show and there's all the personal memories that are attached to it," she says. "We're about to go through 'Dinner Party' and one of my biggest memories is how much my daughter was kicking through the whole episode."

Taking the trip down memory lane is equally sweet for Fischer. She recalls one of her favorite moments on set with Carell.

"I remember shooting 'Diwali' and I had this scene with Steve Carrell. Michael and Pam are sitting outside and Michael's car gets broken and he tries to kiss Pam," says Fischer. "I would always get so excited when I got to have Steve all to myself in a Pam and Michael scene. And that particular episode meant that everybody else got to go home."

She continues: "Steve and I sat in some director's chairs outside in this warm summer evening. We just chatted for an hour while we waited for them to set the scene. When I see an episode like that, those memories come flooding back and they're so special to me."

Office BFFs: Tales of The Office from Two Best Friends Who Were There will be released in 2022.