For the last time ever, HBO released photos teasing the upcoming episode of Game of Thrones, and damn, things look ominous in King’s Landing.

Spoilers ahead for the last episode of Thrones. If you haven’t watched it yet… what the hell are you even doing here? Get out of this post and get caught up before Sunday. Bye!

The network only released two photos, but there’s a lot to unpack here. If you somehow forgot some details about the last episode, Dany and co. obliterated King’s Landing in a very one-sided battle that saw Dany kill thousands of innocent people after they tried to surrender. Basically, the narrative has turned into “Dany is the Mad Queen,” and these teaser pictures don’t do anything to counteract that.

First things first we have this shot, which was also in the (very short) trailer for the episode. It’s Dany standing in front of the Unsullied and what’s left of the Dothraki. King’s Landing is practically gone.

Yeah. Sh*t looks bleak. The only other photo they released is this one of Tyrion, who looks deeply concerned about something.

Maybe it’s the fact that he supported someone who has officially gone off the deep end and murdered thousands of people that were once *his* people? IDK IDK.

Because that’s not much to go on, I’ve done you the courtesy of screenshotting every single frame in the trailer for the episode so you can analyze them to your heart’s content.

This looks like Davos and Jon Snow walking through the wreckage in the city.

Frankly, it’s a miracle the Red Keep is still standing in any capacity.

Here are two shots of Arya, so she obviously didn’t completely run away on that white horse (even though she def should have). 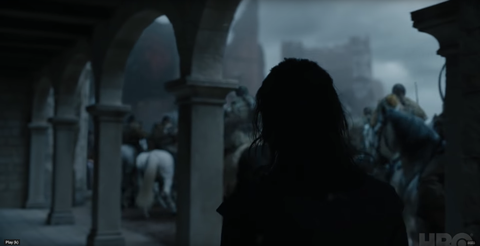 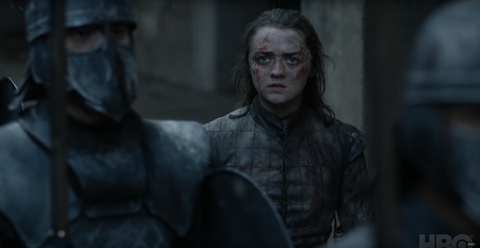 Then it goes back to that wide shot of Dany with all her peeps before it cuts to black.

LOL, everyone is screwed!! That’s all!