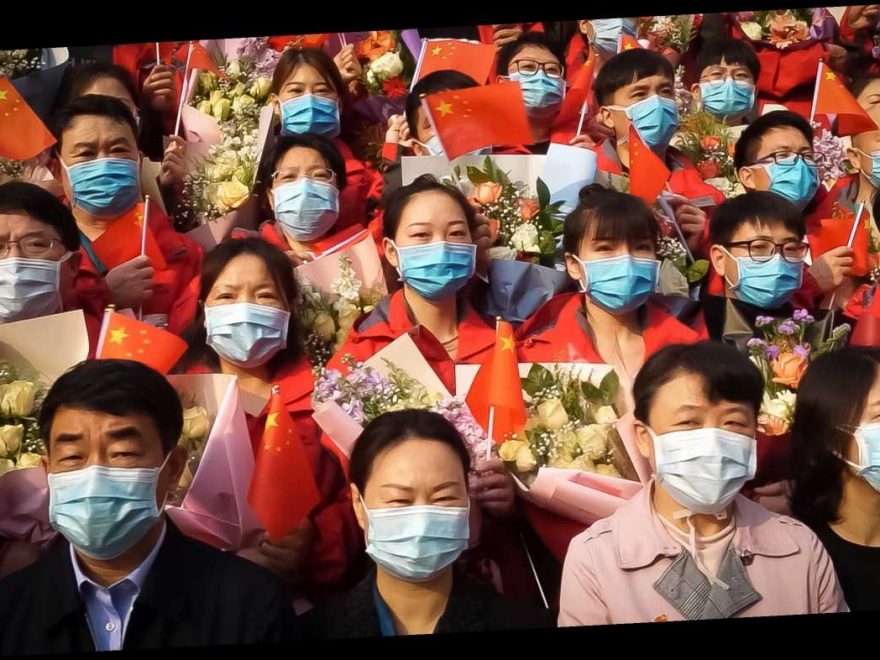 It’s no surprise that many of the COVID-themed documentaries rushed out since the pandemic started lead to where the damage lies — overflowing hospital corridors and rampant governmental dysfunction. Even as Nanfu Wang’s “In the Same Breath” visits those same sore points, it foregrounds one more crucial factor with infuriating detail: disinformation.

Wang’s absorbing first-person account of the coronavirus outbreak initially seems like it’s treading familiar ground, tracking the outbreak of the virus in Wuhan and government propaganda efforts to pretend it’s under control. With time, however, Wang turns the tables on her Western audience, illustrating how those same lies emanated from American airwaves months later.

The result is a sturdy and illuminating essay film that doesn’t exactly break news, but delivers a sobering message about the way the dangers of disinformation spread across the planet just in time to do serious damage. Like Wang’s previous effort, the masterful “One Child Nation,” the filmmaker blends insightful observations with a vast sociopolitical canvas. While that movie tracked decades of abuse and cover-ups in service of China’s appalling one-child family policy, “In the Same Breath” stuffs a broader media analysis into a year of dense, troubling developments worldwide.

But she starts with her usual personal touch, kicking off the narrative with the ostentatious Chinese New Year’s Celebrations of 2020, the last time she herself was in the country visiting her family. Back then, all the fireworks and boisterous expressions of national pride obscured the very real threat of the coronavirus spreading across the nation, parts of which would go into lockdown within a matter of weeks. Wang got out shortly before then, but her husband and young child narrowly avoided a worse fate. As the filmmaker narrates these events, weaving together a breathless montage of home videos and news reports, the human cost of the pandemic comes into immediate focus. Wang’s family escaped the first wave. Others weren’t so lucky. But real terror comes from the realization that the wave had been all around them, while the country refused to admit it.

Chronicling Wuhan’s harrowing state from afar, Wang assembles a crack team of cameramen assigned to roam the hospital wards for deeper glimpses of the pandemic’s toll. What they find there resembles a lot of the footage seen in other documentary dispatches from the time of COVID, from “76 Days” to “Coronation”: Crammed hospital beds, the ominous beeps of life support, and staffers dressed head-to-toe like characters out of a sci-fi movie. In one of the most powerful sequences, she captures a group of medics who realize the patient in their ambulance won’t receive proper care at the hospital, and they struggle to decide whether to take her there anyway or return her home. “We can’t leave her in the ambulance forever,” one of them says, but that state of uncertainty says much about the hesitancy echoing across the country.

So far, so familiar, until the movie arrives at a crucial turning point: One man, observing his dying son, reveals that their journey with the disease stretches back months — as in, long before Chinese media acknowledged the threat.

“Circumstances we consider normal created the crisis we’re in now,” Wang concludes, as she clarifies the timeline and explains how Chinese propagandists glossed over the proceedings every step of the way. That’s not surprising, but it provides a shrewd foundation for the next chapter of the story, when the American information machine operates almost exactly the same way — downplaying the threat while ignoring the very real ramifications of overcrowded hospitals and diminishing supplies.

It’s a wry contrast, delivered as a shrewd blast to the assumption that American democracy operates with greater transparency than the autocratic superpower in the East. “In both systems,” Wang explains, “ordinary people become casualties of their leaders’ pursuit of power.” While that tendency may be easier to illustrate in China, where the government doesn’t even try to hide its intentions — at one point, Wang gives us a grid of Chinese news anchors, all delivering the same newspeak in harmony — it’s little more than a close cousin of Donald Trump shrugging off masks and social distancing, or asserting that COVID might one day just disappear. (Current media darling Anthony Fauci, an early mask skeptic, doesn’t escape unscathed either.)

Both countries also prematurely celebrated their victories against the disease, as Wang proves with China’s histrionic commercials for its medical care, as well as with America’s celebratory tone. “By telling us where to look, they were also telling us where not to look,” she says. And in the movie’s eeriest passage, she shows how well the tactic works, as many of the people she interviews who suffered losses from the pandemic assert that their country did the right thing.

Wang’s U.S. critique isn’t as probing as the Chinese passages, but she manages a few eye-opening moments. Her most provocative takeaways arrive late in the drama, as she acknowledges the lunacy of conspiracy theorists who believe the pandemic is a hoax even as she’s willing to sympathize with their skepticism. Still, in sifting through such a complex tapestry of events, Wang often repeats variations of the same points and lacks the same clarity of purpose that made “One Child Nation” into such a gripping exposé. The effect this time around is a lot of musing and cultural observations over reportorial finesse, but Wang’s such a singular voice that she weaves it all together with constant intrigue.

It may not diagnose a new problem, but “In the Same Breath” doesn’t lack for narrative drive. Wang’s constant voiceover adds another layer to the growing efforts by filmmakers to make sense out of the past year, but it may be the first one to extrapolate a lesson for future ones as well. The pandemic may end, but the system that allowed it to catch the world off-guard shows no sign of letting up. Even as the world attempts to stumble back to stability, authorities can still lie when it serves their interests, and many people will almost certainly accept it without question. When that happens, at least “In the Same Breath” can help correct the record.

“In the Same Breath” premiered at the 2021 Sundance Film Festival. HBO will release it later this year.