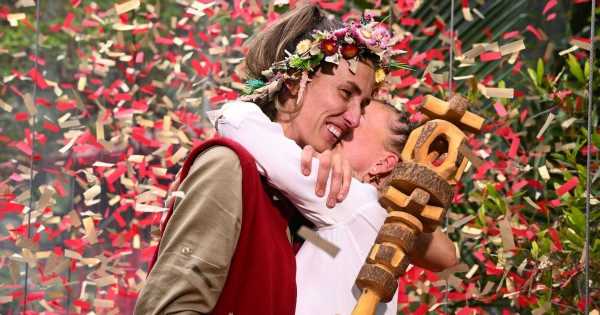 Jill Scott was sweetly reunited with her fiancée Shelly Unitt on the ITV show's iconic bridge after winning the 2022 series of I'm A Celebrity… Get Me Out Of Here!

The footballing star, 35, looked thrilled as she was victorious on the hit ITV show after spending three weeks in camp.

She beat fellow finalists Matt Hancock and Owen Warner to be crowned Queen, who were overjoyed for her as she was announced to have won by hosts Ant and Dec.

Speaking after her incredible win, a stunned Jill put her face in her hands and said: "Oh my God!"

She added: "I just can't believe it, honestly, I think I'm going to owe my grandma a lot of money for those 12 million votes. I couldn't have got through it without all the other guys, it was a team effort."

Later, coffee-loving Jill ditched Champagne to toast being Queen of the Jungle with a flat white coffee.

Less than a minute after the show ended, the Lioness could be seen on Ant and Dec's Instagram with a coffee already in her hand as she posed for photos with the duo.

She and her fiancée Shelly also then spent a few minutes chatting with the hosts.

Partner Shelly had vowed to have a coffee waiting for her whenever she came out of camp.

The couple's six year long relationship has gone from strength-to-strength, with Jill and Shelly announcing their engagement in March 2020.

The post was captioned: “The best coffee so far [ring and heart emoji]”, leading fans to flood the footballer’s comments with messages of congratulations.

Since then, the loved-up couple have become business partners and opened a coffee shop called Boxx2Boxx in Manchester in April 2021.

Shelly has also been there to support Jill throughout her career on the pitch prior to her announcing her retirement earlier this summer.

Back in July, Shelly was in the crowd alongside Jill’s family at Wembley where she saw the Lionesses win the Euro 2022 finals against Germany.

As she celebrated the epic victory, Jill shared various snaps of her loved ones, including one snap alongside Shelly, and wrote: “I have too much love for these humans! MY TEAM!

“The best memories are the ones we make together” WE ONLY WENT AND WON [trophy emoji]”.