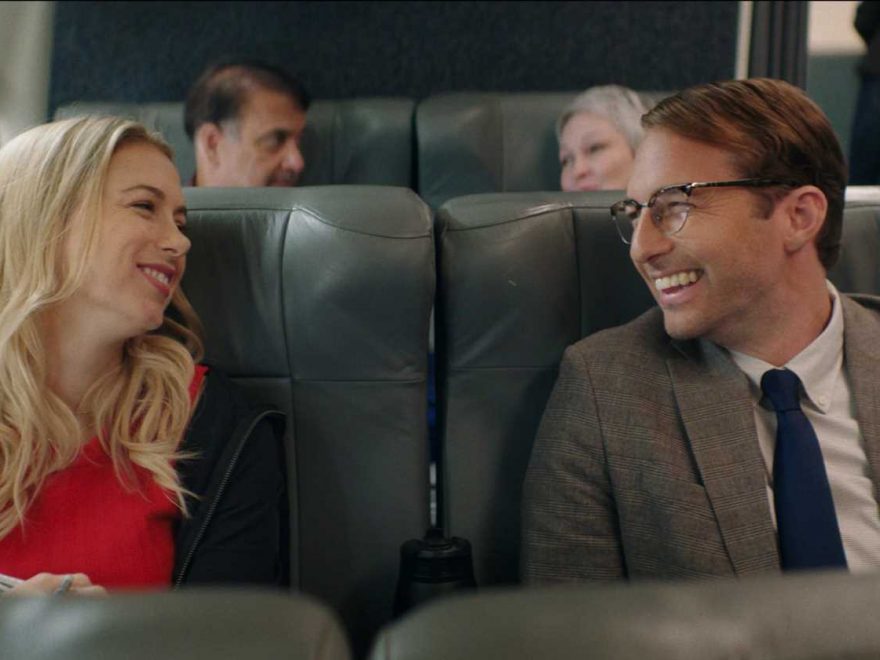 Iliza Shlesinger’s “Good on Paper” is based on a hellish relationship, though in real life, the “Unveiled” comedian says the dating disaster that inspired the movie played out like “one very slow, drawn-out car wreck.”

In the 94-minute Netflix film out Wednesday, which Shlesinger wrote and produced, she stars as driven comic Andrea Singer, who meets and eventually falls for Dennis Kelly (Ryan Hansen), supposedly a Yale-educated man working in finance. But Dennis says a lot of things that Andrea and her best friend Margot (Margaret Cho) grow suspicious of and begin to investigate.

“The first two-thirds of the movie are the mostly true parts,” says the 38-year-old comedian, who won NBC’s “Last Comic Standing” competition in 2008. She has five comedy specials available on Netflix and debuted the six-episode “Iliza Shlesinger Sketch Show” on the platform last year.

“The story is based off of my real-life experience and meeting someone on a plane, befriending them, thinking something was a little off and eventually falling for this person and then finding out everything about them was a lie from the day that I met them,” she says.

Shlesinger spoke about the horrifying ordeal in a 2014 episode of “The Joe Rogan Experience” podcast and the next year on Comedy Central’s “This Is Not Happening” before turning her heartache into cinema.

Shlesinger says “because auditioning can be so painful,” there were no auditions and all of the actors instead received offers for their roles in the movie. The “Spenser Confidential” actress reveals how former “Bachelorette” contestant Tyler Cameron’s cameo came to be, how her real-life reprehensible romance ended, and her thoughts on cancel culture in comedy.

(Edited for length and clarity.)

Netflix in June: 10 shows to watch for, including ‘Sweet Tooth,’ ‘Lupin,’ and a Kevin Hart movie

Question: You and your character Andrea are both stand-up comedians. You’ve said this story is inspired by something that happened to you. How else are you and Andrea similar?

I think Hollywood would lead you to believe women are hapless in love, or hopeless romantics, or clumsy, or too strong and have it coming, when in actuality most women are not hot messes. Most women do take care of themselves and have a career and friends and an enriching life and are dating and dating whoever they choose.

Q: Andrea goes on a date with a man played by Tyler Cameron. How did that cameo come to be? Are you a fan of “The Bachelor”? Is he in your friendship circle?

Shlesinger: I’ve actually never seen the show… (And) he is not in my friendship circle, although he was very, very nice. We wanted to cast (him) because in real life, the person I was on a date with when Dennis Kelly called and said his mom had cancer (as portrayed in the movie) had a very similar vibe. We thought it would be a really great way to get in a surprise cameo from someone that a lot of people recognize.

Q: How did you find out about the lies from the person who inspired Dennis? Did you ever confront him?

Shlesinger: In real life, (it) ended with a whimper, not with the bang. I sent a text, and I said, “I know you didn’t go to Yale,” and he wrote back something to the extent of, “I did not go to Yale. I’ve been lying to you every day since the day I met you.” … My mother called the Yale Registrar’s Office, and they came back, and they were like, “We don’t have a record of a Dennis Kelly graduating here since like 1985.” And then the club he said he belonged to, we called, and he didn’t belong there. Then, I went with my friend Laura to his apartment, and it wasn’t the house that we thought it was.

These things started to unravel, and I think I met up with him one other time, but I didn’t know the extent. He basically just owned up (to it). He was like, “I was so in love with you, and I lied to you at first, and then every day it was just me terrified of the next day.” So, I think this is a case of somebody who made a mistake and lied and then chose to continue to do it. … (Later, his roommate) said, “He’s in so much debt. He said you guys have been dating for a year,” which isn’t true, and then I said, “I feel so bad for him because his mom is dying,” and they looked at me and said, “What are you talking about? His mom doesn’t have cancer.” That was the final kick in the teeth where it went from like “OK somebody who’s misguided, that’s so sad,” to “Oh, this is a horrible person.”

‘You can never do right’: Rita Moreno defends Lin-Manuel Miranda amid ‘In the Heights’ criticism

Robert Duvall on ’12 Mighty Orphans,’ his proudest performance and the major role he turned down

Q: How does writing a movie compare to writing jokes for the stage?

Shlesinger: I don’t really write my jokes, I just say them. I don’t sit down at a computer and write. It’s a verbal process for me, which is why I tour so much because you get to talk it out. But I only have to be concerned with my voice and my point of view. … What makes a great comic is having that point of view. When you write a movie, you have to make sure that while it’s your point of view, not every character sounds like you. I put a lot of time and effort into making sure that everybody was their own person versus just Andrea in different wigs.

Q: Do you have any thoughts on cancel culture? Does it impact your joke writing or work?

Shlesinger: It’s something that you sometimes are forced to reckon with if you made a genuine mistake, but the angry mob doesn’t actually want an apology. They just want to see you ripped to pieces. So you have to decide where your moral compass is. Is this something you’re truly sorry for? Or, is it a story you can weather until the zombie mob finds another brain to feed off of. I think it’s a pendulum that had to swing one way, and that’s good. We needed to correct a lot of things, but when you get people who are being cancelled because they said one thing and people think that the punishment should be that they lose their livelihood, their lives, everything – I think when you have a punishment outweighing the crime, then society needs to put itself back in check.

‘I really hate seeing myself’: Gwyneth Paltrow reveals the only movie she can watch herself in

‘Oh my God, it’s going to eat me’: ‘Raiders of the Lost Ark’ stars talk filming the notorious face-melting scene