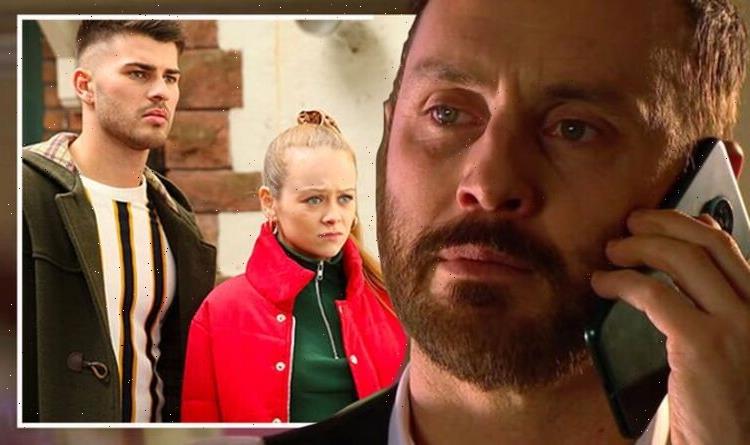 James (played by Gregory Finnegan) has found himself lost in his grief over the death of his mother, Marnie Nightingale (Lysette Anthony), earlier this year on Hollyoaks. As a consequence of his unstable frame of mind, he has started to gamble with huge amounts of money, with very little care for the repercussions of his actions. Unfortunately, his recent past has already started to catch up with him as viewers of the Channel 4 soap have seen him become the target of some dangerous conmen. As he fails to kick his addiction to the curb, he could find himself in trouble with a lot of debt owed to several different people, putting his family in a life or death situation on the television drama.

In Monday’s first-look episode, it seemed James might finally be getting his life back on track after he managed to work with the police to find out who killed conman, Raphael Loftus (Matt Mella).

However, during the investigation into the murder, the authorities discovered the beloved soap character had slept with the deceased shortly before he died.

After struggling to have an intimate moment with his partner, Ste Hay (Kieran Richardson), after leaving the police station, the lawyer’s guilty conscience got the better of him.

He confessed to cheating on his boyfriend and this later saw their relationship come to an end as Ste kicked him out of the Lomax’s felt.

It was the unlikeliest of people who helped him through this dark moment as Donna-Marie Quinn (Lucy-Jo Hudson) encouraged him not to give in and to rebuild his real-life relationships by getting rid of the cryptocurrency apps.

Unfortunately, this reprieve didn’t last long as James returned to the Nightingale’s home and kicked out Donna-Marie along with her two children, Juliet Nightingale (Niamh Blackshaw) and Romeo Nightingale (Owen Warner).

James made vile comments about each of his family members and left them feeling a huge amount of hatred towards him.

It seems at the moment there is going to be no way back for the hotshot lawyer as his addiction gets worse and worse.

However, this will also lead to him racking up huge amounts of debt and soon, he will have people on his back demanding repayments.

The beloved character will have no way of giving them the money needed to clear his debts and therefore, he could call on the authorities for help.

We won’t get there for a few months

With him and his family in danger, he could make a case for them to be put into a witness protection programme for their own safety.

Although their relationships with James would be rocky, Juliet, Romeo and Donna-Marie could be informed by the police about how bad the situation is.

Knowing they have no choice but to save themselves from danger, the Nightingales could agree to do into hiding until the dust settles over.

This would mean an exit for the family, albeit temporary, as James works with the authorities to bring those who want him dead down.

The family have become beloved in recent years, particularly when Juliet took centre stage in the County Lines storyline.

Viewers have watched the family grow from strength to strength and they have even seen a change in Donna-Marie in recent months.

The actress who plays Donna-Marie, Lucy-Jo, has spoken about the huge shift in her alter-ego’s personality and how it has come just at the right time.

Lucy-Jo said: “Donna-Marie sees a lot of herself in James, as she’s also struggled with addiction. She really wants to help him, though part of her thinks time behind bars will stop him from gambling.

“I love how far she’s come! And I absolutely love Donna-Marie – and her teeth. She’s outspoken, and she’s really turned her life around.

“Her life now centres around her kids, and she even wants to help other people, which she’s never done before.”

The soap star continued to tell Inside Soap her character still has a long way to go though until she is head of the family.

Lucy-Jo added: “She’s really trying (to be the family matriarch). Donna-Marie has a long way to go but she’s trying her hardest and that’s all that matters.

“She wants to take care of the Nightingales, and that’s why she continues to try to save James. However, it will get to the point where enough is enough.”

The actor who plays James, Gregory, has also hinted there is a lot more to come for his character before he starts to see how bad his situation has become.

Gregory explained: “It’s hard to film because we’ve spent so long seeing James cultivate a relationship with Romeo, Juliet and even Donna-Marie to an extent.”

“To suddenly watch him break all of those relationships is quite painful,” the soap star said in an interview with Digital Spy.

“I think we’re heading towards rock bottom, but we won’t get there until a few months’ time! It could be over and out for James at this point.”

Although he is on turbulent ground with his family, the hotshot lawyer could still come back fighting when he knows they are in danger.

But will putting them into hiding be enough to ensure their safety or will his enemies get to them before he can right his wrongs?