Many comedians wait their entire careers for the kind of year Hannah Gadsby had in 2018. When her first filmed stand-up special, “Nanette,” hit Netflix that June, Gadsby became an international sensation almost overnight. While no one could have predicted “Nanette” would be such a massive success, it’s no surprise that audiences were hungry a searing cultural commentary and a biting takedown of the patriarchy wrapped in a wryly palatable package of Gadbsy’s cheeky and insightful humor. In her infinite wisdom, Gadsby managed to spin comedic gold from topics as unexpected as classical art history, being gender non-conforming, and sexual trauma. It was a magic trick, a revelation, and a total game changer for what stand-up comedy can be and do.

Two years later, she threw down the gauntlet again, bravely forging ahead to follow up her blockbuster debut with another special. Released on Netflix in May, “Douglas” is just as sharp, entertaining, and original as “Nanette,” though it lacks some of emotional intensity of the former. As she did for queer and gender non-conforming people in “Nanette,” however, Gadsby uses “Douglas” to discuss her autism diagnosis. An awkward interaction at the dog park becomes a hilarious window into the mind of a neuro-divergent person, garnished with a healthy ribbing of misogyny, naturally.

She also uses “Douglas” to address some of her “haters” — a melange of homophobes and unknown comedians who took the success of “Nanette” as a personal affront. Rather than take it personally, she crafted new material out of the criticism. The result is a very funny tongue-in-cheek “lecture” on classical art’s plethora of paintings of three naked ladies standing around fountains.

“I don’t mind people not liking my work. Nobody can be everyone’s cup of tea. That’s just the glass of water,” Gadsby said during the first of many laugh out loud moments of a recent phone interview. “I don’t think that everyone should love my work. I think that that’s a recipe for blandness. But when people try and justify why they hate it, they want the world to know they hate it. I find it really interesting.” 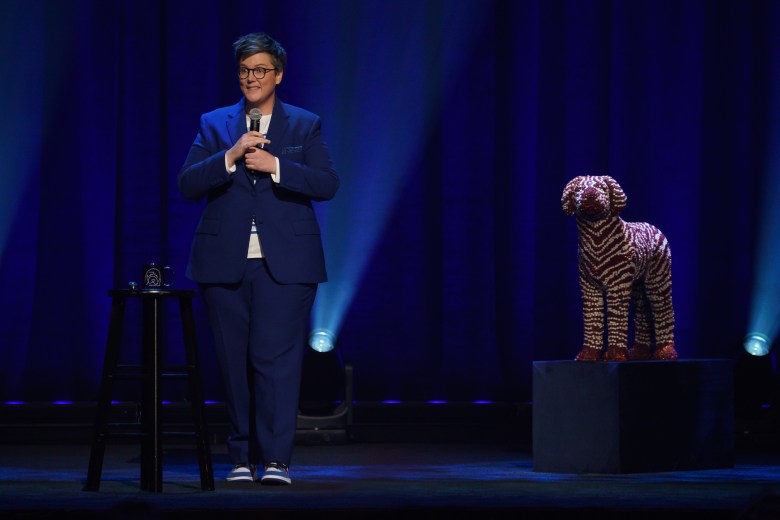 Ever a cogent observer of human behavior, Gadsby began to look at the content of the critiques, both to analyze it and to make fun of it.

“It just comes down to basic misogyny, and that’s what I went after. You know — ‘women don’t belong on stage,’” she said. “It seems like it was personal because I made it around the haters with ‘Nanette,’ but really it’s not. It could be any woman who sort of puts their head above the pulpit and recognizes the kind of stuff I was dissecting.”

Gadsby is a master at finding the funny in the unlikeliest of places, from Titian to autism. While “Nanette” was intensely personal when it came to Gadbsy discussing her sexuality and gender expression (she calls herself “gender not normal” in “Nanette”), Gadsby said “Douglas” felt more vulnerable because of how little most people understand about the autism spectrum.

“In many ways, it did feel more dangerous because there’s an understanding of queer in terms of sexuality and gender expression and coming out stories. Straight people have an understanding of what the opposite [of their experience] is. But neurotypical people do not think about the way I think,” she said. “There’s so much that people don’t understand about autism…and also very few people on the spectrum get to speak for themselves in such a large platform. So to be there, I’m representing a huge spectrum.”

She felt that burden of representation while also battling the immense dearth of knowledge about the spectrum. “My experience with autism is not usual because no experience of the spectrum is usual, because it’s called a spectrum. You hit up against this idea that I don’t fit in with people’s idea of what autism is. There’s part of me that has to defend my autism. I have to tell people that I have autism and I have to teach people what autism is. It’s a really difficult thing to be able to do while entertaining people.”

Gadbsy is modest about the impact she’s had on comedy, though to the outside observer it has been immense. Besides Ali Wong’s 2016 Netflix special “Baby Cobra,” its hard to remember a recent comedy special as impactful and popular as “Nanette” was. She will concede, however, that she hopes her success has paved the way for more marginalized voices in stand-up.

“If anything, I want to broaden the scope of what standup is, actually. It’s an amazing opportunity for marginalized voices to get up and say stuff. And that’s what it’s always been,” she said. “But back in the day, a marginalized voice was just men who were different from other men. I’d like my work to show that stand-up can change and be something for different kinds of voices.”