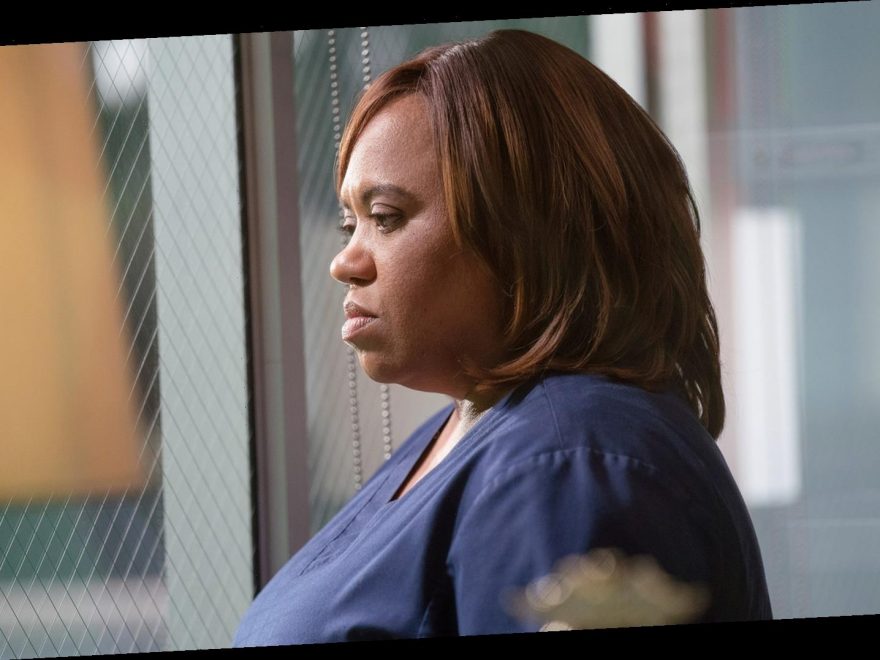 This post contains spoilers from Thursday's episode of Grey's Anatomy.

Grey's Anatomy remains somber as the doctors of Grey Sloan Memorial mourn the loss of one of their own — but good news may be on the horizon for Meredith Grey's COVID battle.

In last week's two-hour crossover mid-season premiere with Station 19, the doctors fought hard to save the life of Dr. Andrew DeLuca (Giacomo Gianniotti), who was stabbed in his attempt to pursue and expose a sex trafficker. Things quickly took a turn after an emergency surgery, and DeLuca died on the operating table.

Teddy Altman (Kim Raver) cared for Meredith (Ellen Pompeo) as she continued to face her own severe case of COVID-19. Teddy, unraveling in the wake of DeLuca's death, thought she saw DeLuca appear to her, only to realize that she was imagining things, and pediatric surgeon Dr. Cormac Hayes (Richard Flood) was standing in front of her instead. "I expect DeLuca's autopsy results by the end of the day," Bailey told a group of doctors, including DeLuca's surgeon, Teddy, who replied, "You asked for his results? Why?"

"Andrew DeLuca was one of our own," Bailey explained. "Obviously something went wrong — I want to know what that was."

"I already told you every step of what happened," Richard argued, but Bailey insisted that he didn't tell her until "well after I could have done something to change the outcome." Meanwhile, Meredith's late husband Derek Shepherd (Patrick Dempsey) made his third surprise appearance of the season as Meredith — sedated and on a ventilator — continued to experience dream sequences set on an idyllic beach.

"You looked just like Ellis just now, the way you're looking at your feet, so serious, and she gives that worrying little brow," Derek told Meredith, discussing their youngest child, daughter Ellis, who was born after Derek's death.

"This is torture," Meredith replied, to which he said, "It's a torture of your own devising — you're always good at that."

"You never got to meet Ellis. We didn't even know, I wish you got to know her," Meredith later told her husband.

"She looks just like you," Derek gushed of his daughter. "She breaks the rules just like you. And she's quick to anger, and quick to laugh. She's smart, gifted, stubborn, just like you. Hates pink and purple, loves brown and green and gets enraged at the thought of anybody wanting to cut down a tree."

Back at Grey Sloan, Bailey and Richard continued to argue about whether or not to look deeper into DeLuca's death, ultimately realizing that the doctors did everything they could to save him. Bailey later decided to take some time off from the hospital, asking the always-willing Richard to step into her place.

And then back to the beach. Meredith begged her vision of Derek to come "closer" as Derek went on discussing their children — perhaps foreshadowing that Meredith would be reunited with them soon.

"You remember when you were trying to teach Zola how to ride a bike?" Derek asked. "She got so frustrated … she threw it down and she goes, 'Mama, you do it!' And she got so mad."

"Well, I was trying not to laugh," Meredith said, and Derek perplexingly replied, "So am I."

"I can't do it for you," he continued. "It's your beach. Zola is amazing, isn't she? She's just so brilliant. She writes me letters in her journal — did you know that?"

As Dr. Hayes looked after Meredith at the hospital, her dream sequence began to merge with reality for the first time.

Hayes begged Meredith to "fight" as he discussed how her kids video chatted her while she has been sedated, and Derek, still on the beach, advised Meredith to "hear him out."

"I watched my kids lose their mom, you don't want that for your kids, Grey," he replied. "There are people getting better here — you could be one of those people."

"I believe that you could, because I've heard the stories about all the fights you've already won, so I'm asking you to fight," Hayes continued, as Derek assured her, "It's okay. I'll be right here."