Since-deleted tweet joked about U.S.’s political climate and if “camp uniforms will be striped, like the ones at Auschwitz” 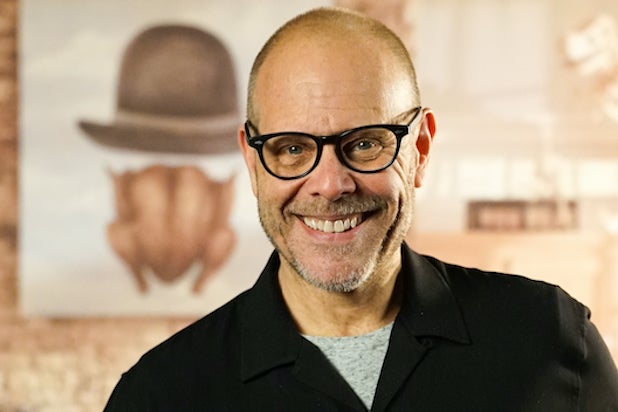 Food Network personality Alton Brown apologized Wednesday for the “flippant reference” he made to the Holocaust in a tweet the night before saying, “It was a very poor use of judgement [sic] and in poor taste.”

On Tuesday, the “Good Eats” host tweeted, “Do you think the the [sic] camp uniforms will be striped, like the ones at Auschwitz or will plaid be in vogue?,” drawing a comparison to the current U.S. political climate and the World War II genocide of the European Jewish community, in which some six million Jews were murdered at concentration camps like Auschwitz.

When one user responded, “Depends on what you’re worth when you go in,” Brown replied, “I have no gold fillings.”

Following backlash to tweets, Brown deleted them the following day and shared this statement: “I apologize for the flippant reference I made to the Holocaust in my tweet last night. It was not a reference I made for humorous effect but rather to reflect how deeply frightened I am for our country. It was a very poor use of judgement [sic] and in poor taste.”

This incident is the second time Brown’s tweets have caused a stir on social media this week, with the Food Network host tweeting Monday that he has voted Republican most of his life and wants “to believe there are still ‘very fine’ people on both sides of the aisle but…if #GOP leaders don’t get their collective noses out of that man’s ass, we’re gonna have words.”

Those comments received backlash, and led to Brown demanding an apology from Newsweek for calling him a “Republican” in their coverage of his tweet.

“Dear @Newsweek I think you owe me an apology. Saying that I have voted for republicans in the past is not the same as being a republican,” Brown wrote to his followers on Twitter, who number more than 4 million.

He also wrote, “Let me clarify: I have voted republican in previous years. But, I voted for and strongly support #BidenHarris2020 as well as @ReverendWarnock and @ossoff in my state. It’s time for decency and unity to trump tribalism, racism, and disinformation.”