How Clubhouse Is Keeping Stand-Up Comedy Alive During the Pandemic

Golden Globes Have Kept More Viewers Than the Oscars, Emmys and Grammys

The Globes have been the most stable of the major awards shows — but Sunday is NBC special’s first crack vs. COVID

The Golden Globes air Sunday on NBC, and we can pretty much tell you how many viewers they’ll get. Not so much because we’re expert prognosticators, but because the Globes viewership has held remarkably consistent from year to year.

That has not been the case with the other major awards shows like the Academy Awards, the Emmys and the Grammys.

The Oscars have seen some wild TV audience swings in the past three years, particularly among adults ages 18 to 49 — and the fluctuations have been significantly more bad than good. Last year, the Academy Awards viewership dropped 20.2% overall and 30.8% among adults 18-49, according to Nielsen — and that was with a normal, live-and-in-person show that happened weeks before the coronavirus pandemic shut down the United States. 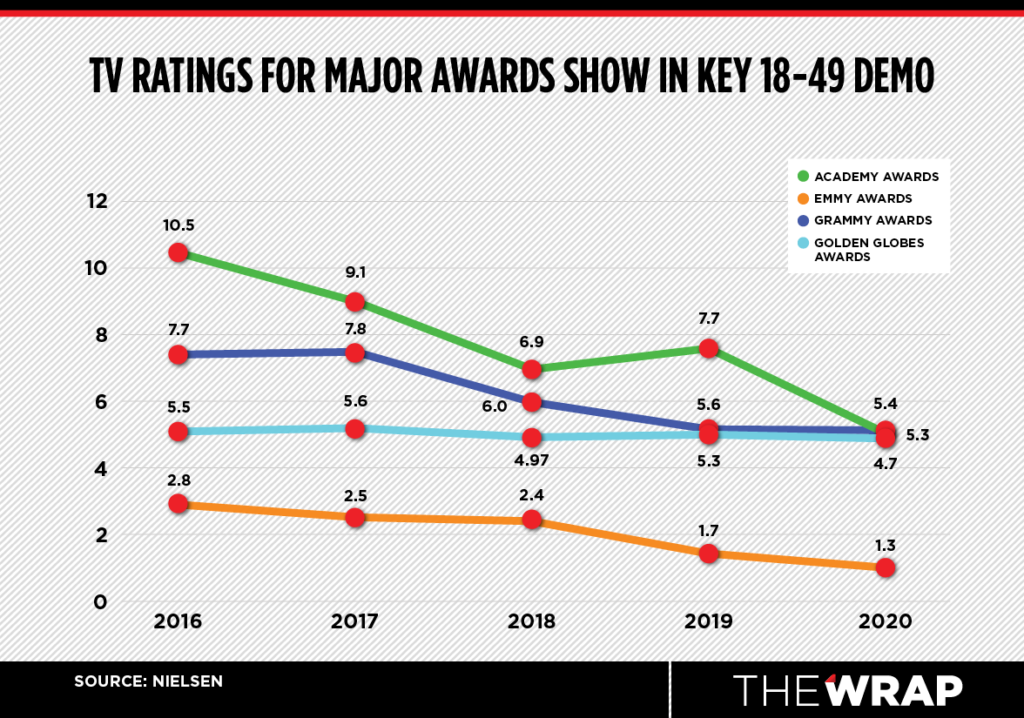 As a matter of fact, the Oscars fell so hard among adults 18-49 last year — an eye-popping 30.8% — that the Grammys actually (barely) beat movies’ biggest night in the key demo.

Over the last five years, viewership of both the Oscars and the Emmys has consistently declined in the key demo, with multiple years of double-digit percentage drops and a 2020 demo rating that’s roughly half of what it was in 2016.

Though last September’s Emmys dropped just 8.5% in total viewers after two straight double-digit declines, a heap of damage had already been done when the show aired on Fox in 2019 and fell a whopping 32% in total viewers from the previous year.

After a huge audience loss in 2018, when viewership fell 24%, the Grammys have essentially stabilized.

While the Golden Globes total audience has slipped each of the past three years, the worst dip was relatively modest 5% drop in 2018. Sadly, that counts as very strong retention in today’s TV landscape. 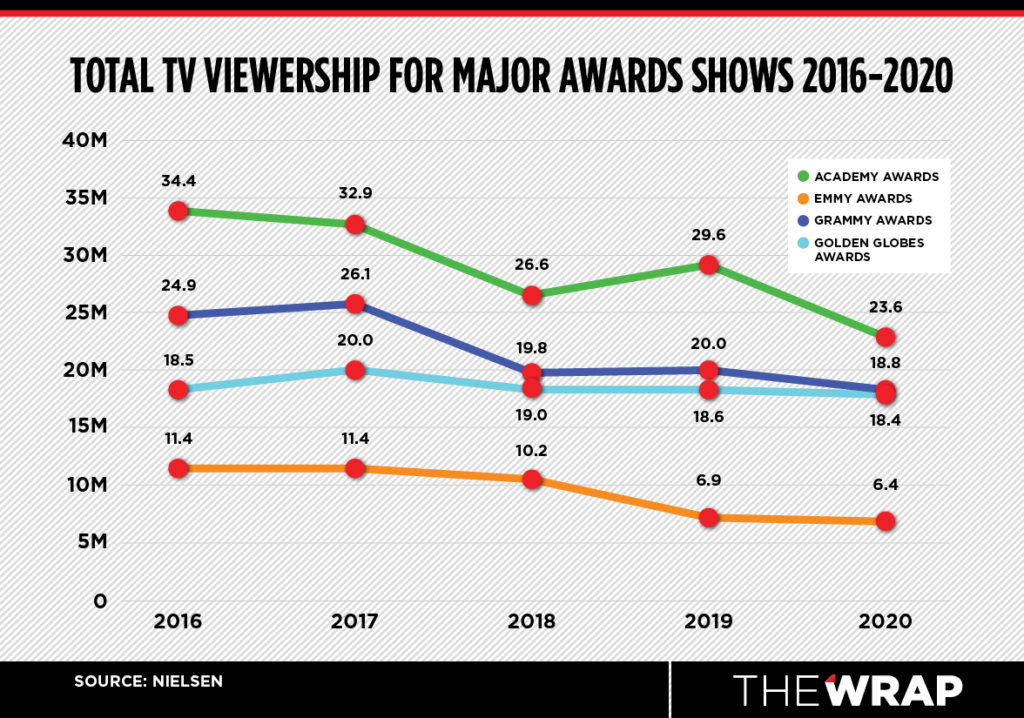 It’s nice to be first during awards season and to hedge public interest with both movies and television. The loosey-goosey booze-fueled atmosphere of the typical Globes broadcast probably doesn’t hurt either since the show typically takes place in the intimate ballroom of the Beverly Hilton rather than in a traditional theater.

It’s worth noting that the 2020 Golden Globes, Grammys and Oscars all took place before COVID upended awards shows. In other words, they each had real, live audiences when the Globes slipped 1.5%, Grammys  fell 5.8% and the Academy Awards plummeted 20.2% when “Parasite” took home Best Picture.

See the recent rise and fall of each of the majors awards shows above. We focused on the past half-decade for digestibility.

The 2021 Golden Globes air Sunday, Feb. 28 at 8 p.m. ET/5 p.m. PT on NBC. They will be co-hosted by Tina Fey and Amy Poehler, who will handle their share of the emceeing duties from separate coasts.