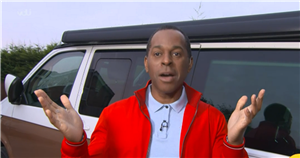 Good Morning Britain host Richard Madeley has called out Andi Peters for comments he made regarding the host's lack of technical experience.

Andi appeared on screen to talk about the competition once again, but immediately began joking about Richard as he made a swipe at him not knowing what recorded TV was.

The competition host joked about Richard believing a recording was similar to the old-fashioned tape recorder, with Susanna immediately jumping in to join Andi in the quips.

Susanna Reid told Andi that catch up would be a new concept to Richard, as Andi responded: "ITV Hub is going to blow his mind!"

Further jokes flooded in as Andi referenced viewers needing to call up to take part in the competition, as he showed Richard what his smartphone looked like and quipped that Richard would be using an old phone.

Susanna jumped in once again as she mimicked the classic phones and laughed along with Andi at Richard.

The 65-year-old host appeared unimpressed as Andi also pulled out his phone and showed him what the Siri feature was as he Googled Richard Madeley. Richard informed the pair that he was previously told to "never Google himself" and has taken the advice on board.

As the pair started to wave off Andi, Richard made a quip about his incredibly "ageist" comments, as Andi appeared shocked at his reaction.

He said: "Alright we'll come back with more ageist abuse from him," as Andi raised his hands while the fellow hosts laughed it off.

Taking to Twitter, some viewers were laughing at the interaction, with one user writing: "Oh Andi, loving it. You'll be done for ageist, but loving it!"

Another said: "Andi Peters record dig," alongside a GIF of someone laughing to the point where they spit their coffee out.

Although Richard was unimpressed with the comments, it seems there were no hard feelings between any of the hosts.

GMB continues weekdays at 6am on ITV.