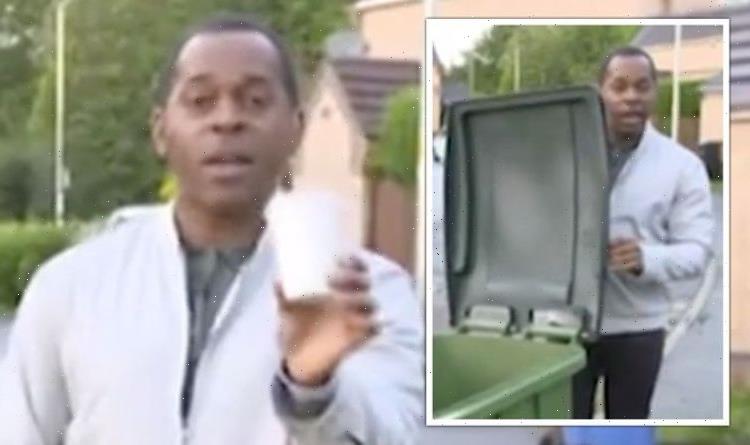 Andi Peters, was reporting back to Good Morning Britain hosts Kate Garraway and Ben Shephard from a street in Stockport, as he informed viewers on how they could win £1million. The presenter was chatting to residents who’d previously won money from an ITV competition but Kate was more interested in knowing when the bins outside the homes shown on screen would be collected. When Andi took a look inside the bins, he was incensed by what he saw.

“We’ve got news for you here on bin watch,” Andi began.

“The green ones, this is what you wanted to know about Kate, the green bins are for garden bits and pieces, they’ve already gone.

“We’re still waiting these bins to be collected,” he continued before lifting the lid of one bin.

“Oh there’s a wasp!” he exclaimed before scrambling to get away from the bins.

“Andi in some sort of fashion breakdown. #GMB,” Steve B simply remarked.

Others meanwhile were simply growing tired of hearing about the £1million competition again and complained online.

“I’d love it when Andi Peters turns up at someone’s crib if they just said Andi man I just can’t he a*sed and shut the door #gmb,” Rich joked.

Joe asked: “Omg how much longer do we have to here about Andi peters bloody competition #GMB.”

The moment came after Richard Madeley branded Andi of being “ageist” as he swiped at the host on Tuesday morning.

Andi teased the presenter over his knowledge of recording claiming he thought it was similar to an old-fashioned tape recorder.

Susanna Reid joked catch up would be a new concept for Richard as Andi continued: “ITV Hub is going to blow his mind.”

Andi continued to tease Richard laughing about his phone model and showing him what a smartphone looks like.

However, Richard, 65, was clearly far from impressed with Andi’a taunts and lashed out at him.

Good Morning Britain airs weekdays on ITV at 6am.