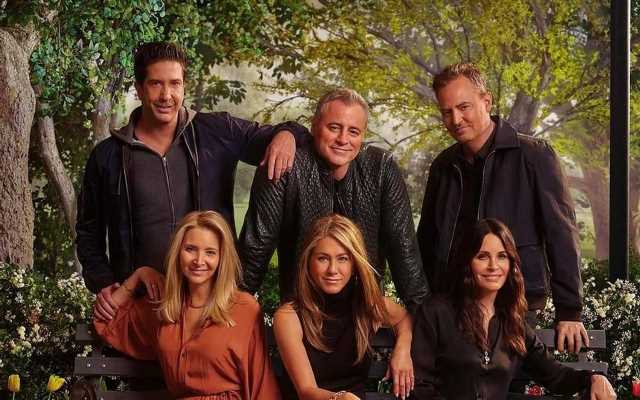 Jennifer Aniston, David Schwimmer, Matt LeBlanc, Courteney Cox, Lisa Kudrow, and Matthew Perry are joined by surprise guests as they get together to reminisce their time on the NBC hit show.

AceShowbiz –David Schwimmer hosted an all-cast quiz as part of the “Friends” reunion special, which will debut next week (27May21).

The much-anticipated HBO Max get together will also feature the co-stars checking out recreated sets from the beloved show, staging read throughs from favourite scenes, and reminiscing about their time on the hit series, which ended 17 years ago.

Recalling the moment he knew that he and his castmates were huge stars, Matt LeBlanc says, “I remember one time I had the news on and on the TV was an aerial shot of each of our houses and I remember looking at it and going, ‘What the f**k? My roof is a mess.’ “

Jennifer Aniston adds, “I went to the producer of the show I was on and he said, ‘That show is not gonna make you a star!’ “

The official trailer for “Friends: The Reunion” is now online.

This unscripted special will see all six original cast get together at their sitcom’s original soundstage, Stage 24, on the Warner Bros. Studio lot in Burbank. HBO Max stated, “In order to avoid any misunderstanding about what this special is, we want to make it very clear that this is not a new, original episode of the series. The cast will be appearing as themselves, not as their beloved characters.”