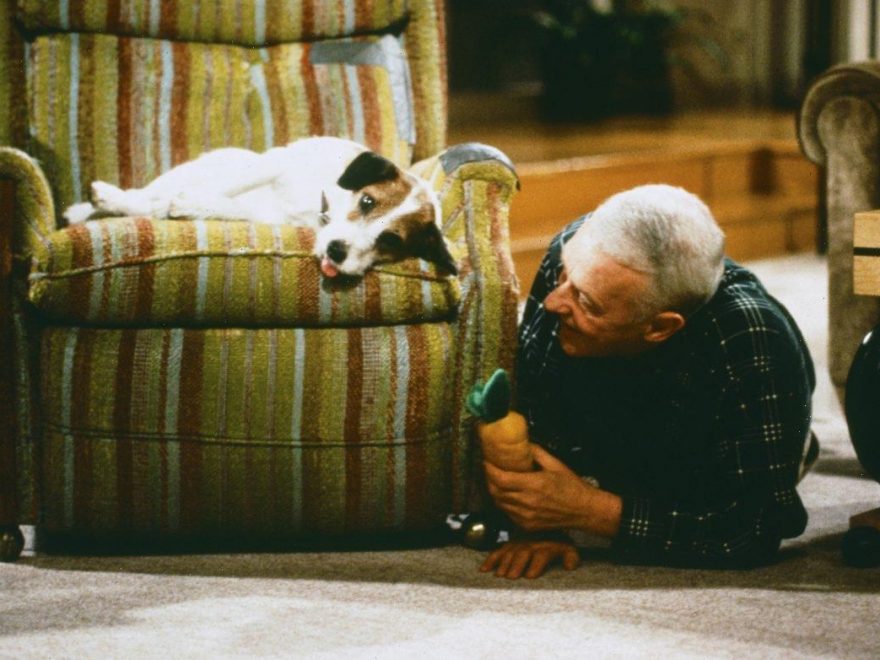 Frasier, a spinoff of Cheers, ran for 11 illustrious seasons. The show cleaned up at awards ceremonies and remained a fan favorite for the entirety of its run. While Dr. Frasier Crane and his family and friends were a huge draw, one special character became a breakout star. Moose, the dog that played Martin Crane’s dog, Eddie, amassed a ton of fans during his tenure on the show. While he retired before the series came to a close, his return for a final curtain call was noted as incredibly moving by at least one cast member.

The dog who played Eddie on ‘Frasier’ had humble beginnings

Moose, the dog who played Eddie, was a canine star by any measure, but he didn’t have Hollywood beginnings. The dog that would become best known as Eddie was born in the 1990s and adopted by a Florida family. The family, however, reportedly found it difficult to deal with the character traits often associated with Jack Russell Terriers. According to The Pet Express, Moose’s original family couldn’t handle his hyper nature, dubbing him untrainable, before they put him up for adoption.

Mathilde de Cagny met Moose and knew he was something special. She said she knew he wanted to be doing “something,” so she adopted the dog, flew him to California, and set her sights on training him. The training went well, obviously. The pint-sized pooch landed the role of Eddie because he could stare down Kelsey Grammer.

Moose became so engrained in the fabric of Frasier that the cast couldn’t imagine signing off for the last time without the beloved dog with them. According to Mental Floss, Moose, then 14, was brought out onto the stage for the cast’s final curtain call. David Hyde Pierce, the actor who portrayed Dr. Niles Crane for all 11 seasons of the show, recalled the moment. He said watching Moose recognize applause one last time was especially moving.

Pierce recalled that Moose reacted to the applause, despite having gone almost completely deaf. According to the actor, his snow-white fur made him nearly unrecognizable as Eddie, but the dog’s spirit persisted. Moose died in 2006, two years after the show’s final episode aired. He was 16.

Who took Moose’s place when he retired?

While Moose was ready to retire from Frasier at 10, the series wasn’t prepared to say goodbye. Cagny knew Frasier was going to be a long-running series and considered that when breeding Moose. Reportedly, Moose fathered one litter. The goal was to produce a puppy who looked similar enough to Moose to take his place on Frasier eventually.

The litter consisted of three puppies. Two of them didn’t look enough like Moose to take his place. One puppy, Enzo, fit the bill. Enzo replaced Moose in the final four seasons of Frasier. Another puppy from the liter, Moosie, whose markings were too unique for the role of Eddie, was adopted by Peri Gilpin, the actor who portrayed Roz Doyle on the hit series.