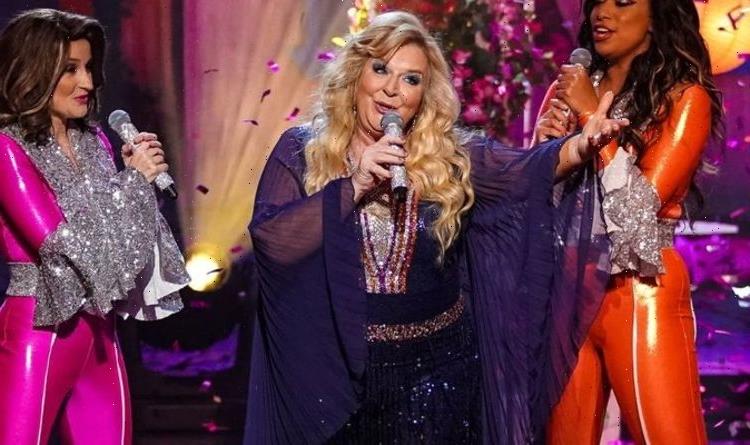 Fern Britton was the final celebrity to take to the stage on All Star Musicals as she channelled her inner Donna from Mamma Mia to perform Super Trouper. The former This Morning host looked incredible as she transformed into a disco queen but her vocals failed to impress ITV viewers.

“Oh Fern that was an absolute shocker my dear! Love Gyles though and Ben #AllStarMusicals #Musicals.”
However many enthused over Fern’s performance with Sarah posting: “Go on #fernbriton #AllStarMusicals you super trooper.”
It’s A Musical Podcast added: “She’s in the costume! Go on @Fern_Britton!
“A really fun performance to ens the competition on! She looks like she’s having the time of her life! #AllStarMusicals.”

Ahead of her performance, Fern spoke about why taking part was so important to her.
She told the Loose Women panel she would be following in the footsteps of her father, Tony Britton.
Fern said: “Well yes, you know my father was a very big star in the West End.
“Particularly in musicals but also you know drama, comedy on television, ‘Don’t Wait Up’, ‘Robin’s Nest’.

“And so I thought, well I mean perhaps there is something in the genes that means I can do something in a musical.
“The answer is no.”
While Fern wasn’t a hit with viewers, Ben Miller was although viewers questioned his Time Warp choreography.
All Star Musicals is available to watch on ITV Hub.