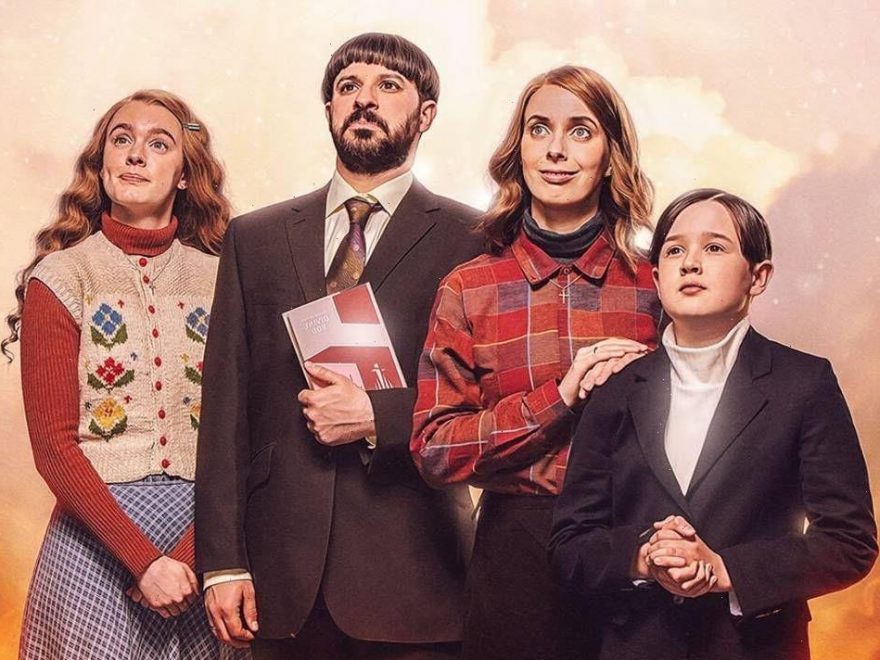 Everyone Else Burns sees a family of four who are dedicated members of a religious cult. They believe the apocalypse will happen in the next 10 years but each one faces a different problem which stems from their faith. Express.co.uk has all there is to know to watch Everyone Else Burns.

WARNING: This article contains spoilers from Everyone Else Burns.

How many episodes are in Everyone Else Burns?

Everyone Else Burns makes its debut on Monday, January 23, at 10pm on Channel 4, with two back-to-back episodes.

The new comedy will consist of six episodes in total with a single new instalment coming out every Monday night in the same time slot following the initial release date.

This means that, as long as there are no changes to the schedule, the final episode of Everyone Else Burns is going to air on Monday, February 20.

But fear not if you can’t wait for it on the night as there is an alternative.

Once the first episode comes out on Channel 4, the entire box set of Everyone Else Burns will come out on the channel’s streaming service All4.

So fans are going to be able to watch the dark comedy whenever they wish.

Unlike other streaming services, users don’t need to pay a monthly subscription fee for the platform.

Everyone Else Burns has been described as a “coming-of-age” story that follows the unconventional Mancunian family.

David Lewis (played by Simon Bird) is desperate to move up the ranks and become an Elder, meanwhile, his wife Fiona (Kate O’Flynn) becomes intrigued by their neighbour.

Their eldest daughter Rachel (Amy James-Kelly) is starting to consider whether or not she will be allowed to go to university and 12-year-old Aaron (Harry Connor) is having to cope with bullies at school.

There is also a star-studded cast to get excited about with this sitcom.

Starring in the leading role as David Lewis is actor Simon Bird who is best remembered for playing Will McKenzie in The Inbetweeners and Adam Goodman in Friday Night Dinner.

Actress Amy James-Kelly, who is behind Rachel, has been in Coronation Street, Safe, Gentleman Jack and The Bay.

Then there is Miss Simmonds actress Lolly Adefope who plays Kitty in the BBC comedy Ghosts.

The synopsis for episode one reads: “David competes with a rival when a position of authority in the church opens up.

“Meanwhile, his 17-year-old daughter Rachel preaches the word of God around the city, until an encounter with a handsome boy changes her whole outlook.”

Whereas the description for the second instalment that follows says: “David unearths his order’s 1000-year-old rulebook, and demands his family follow it to the letter.

“Fiona starts her own business in defiance of the order’s traditions, and Rachel tries to obtain a mobile phone.

“Aaron helps his dad to convert a non-believer, but his harrowing artwork of the apocalypse makes the wrong impression.”

Everyone Else Burns airs every Monday at 10pm on Channel 4.