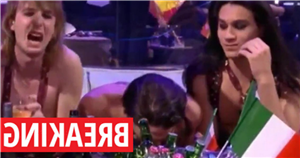 Eurovision bosses have confirmed that one of the members of winning Italian band Mâneskin will take a drugs test amid speculation that he snorted drugs live on-air during Saturday's Grand Final.

A spokesperson told Express.co.uk: "We are aware of the speculation surrounding the video clip of the Italian winners of the Eurovision Song Contest in the Green Room last night.

"The band have strongly refuted the allegations of drug use and the singer in question will take a voluntary drug test after arriving home.

"This was requested by them last night but could not be immediately organised by the EBU.

"The band, their management and head of delegation have informed us that no drugs were present in the Green Room and explained that glass was broken at their table and it was being cleared by the singer.

"The EBU can confirm broken glass was found after an on-site check. We are still looking at footage carefully and will update with further information in due course," they concluded.

They were seated together at Saturday's live Grand Final green room, and deny all accusations of wrongdoing.

They released a statement on Saturday night which read: "We are really shocked about what some people are saying about Damiano doing drugs.

"We really are AGAINST drugs and we never used cocaine. We are ready to get [tested], cause we have nothing to hide.

"We are here to play our music and we are so happy about our Eurovision win and we wanna thank everyone for supporting us. Rock n' roll never dies. We love you."

Accusations originally rose online when a clip of the group in the green room went viral.

The band can be seen sitting around their designated table when lead singer Damiano puts his head down towards the table.

After a few seconds, a bandmate nudges Damiano and he looks up.

It led to calls from some Eurovision fans for a drugs test – which the band have said they'll willingly do.

Clearly bruised by James Newman's crushing defeat – leaving the UK with a staggering nul points – one user joked: "Drug test and disqualification for Italy – all points automatically to go to last place. UK have won."

After the show, the winners were engaged in a Q&A when a question relating to the accusations arose.

"There was a sequence during the broadcast when you are seen in the background and seen to be snorting something, and people online are suggesting you are taking cocaine. What was it?" someone asked.

"I don't use drugs, please guys. Don't say that really," he added.

Fans of the band rushed to defend them online, with one suggesting he broke a glass and was "licking" the liquid to clean it up.

Someone else suggested he was overwhelmed by the band's win and simply rested his head on the table before shouting out with joy.

And plenty said those making accusations were simply "jealous" of Italy's huge win, after they scooped 524 points in the contest.