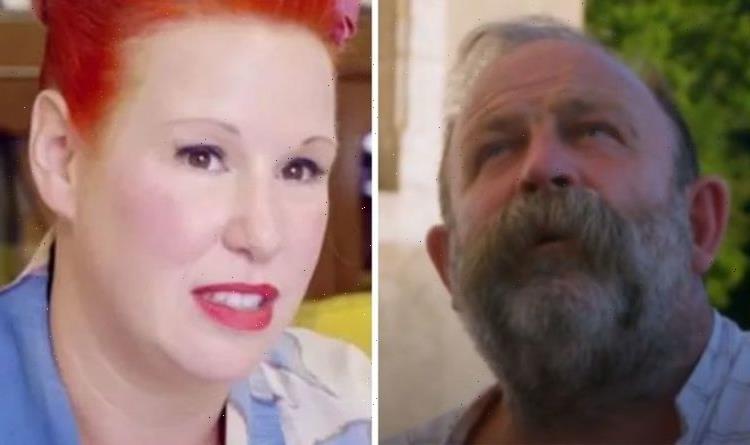 Escape to the Chateau: Dick and Angel on re-rendering wall

Angel Adoree and Dick Strawbridge have come a long way with their fairytale chateau since initially buying and revamping it for their wedding in 2015. With their journey documented on Escape to the Chateau, updates from the couple continue to intrigue viewers of the hit Channel 4 show. In the latest episode, Angel tried to convince her husband that they needed to re-render the entire chateau, arguing it was “in a dire state”.

Angel suggested re-rendering the entire building to a stunned Dick.

“Sorry, sorry, are you taking the mickey?” He asked. “Are you serious?”

Angel replied: “I think we’ve just never had the conversation.”

Dick, 62, clearly didn’t like the idea of re-bricking the entire castle.

Trying to twist his arm, Angel, 43, continued: “I think there’s such an investment in the scaffolding and at some point in our lifetime, we’re going to want to render the house.”

She added: “The front actually is not that bad, but you go round the sides it is in dire states, some of it.

“I actually, genuinely thought that that’s what would happen as the patches came down.”

Baffled, Dick asked: “You were going to tell me when?”

She probed: “Are you honestly happy? You can stand back with our beautiful new roof and be happy with the outside not being kind of rendered?”

Once work had begun, Dick was concerned about glare coming off the walls.

He admitted he was “scared” as they started to work through the logistics.

“I feel tearful even thinking about getting it wrong,” Angel admitted.

Eventually, the work was got off to a successful start, and Angel commented that she was “relieved”.

The revamping of the 1860s Chateau de La Motte Husson proved to be a huge effort for the couple when they first took on the project in 2015.

The hard work proved to be worth it for the family, who have succeeded in the seven years since in creating the flourishing business they had dreamed of.

With their two children Arthur and Dorothy, they have built up a huge following of fans who enjoy watching the transformations they make.

Escape To The Chateau continues on Sunday at 8pm on Channel 4.