Former Emmerdale star Malandra Burrows has expressed how inspired she feels by Deborah James, after recently sharing her own cancer diagnosis.

This week, it was announced that You, Me And The Big C presenter Deborah, who was diagnosed with bowel cancer in 2016, had been moved to end-of-life hospice care, where she is surrounded by her loved ones.

The 40-year-old set up a fundraiser called the Bowelbabe Fund for Cancer Research UK, which has so far surpassed £2.6million in donations from over 150,000 supporters.

Last month, Malandra – who played Kathy Glover on Emmerdale from 1985 to 2005 – announced that she was receiving treatment after being diagnosed with breast cancer in February.

In a new interview with The Mirror, the actor explained that she was alerted that something could be wrong when her dog, Teddy, laid on her chest and ‘kept looking up at me’, before ‘thumping’ her on her left breast with her head ‘so hard it brought tears to my eyes’.

After checking her breast and discovering a lump, before being informed she had breast cancer, Malandra spoke on Wednesday’s Lorraine about her journey so far. 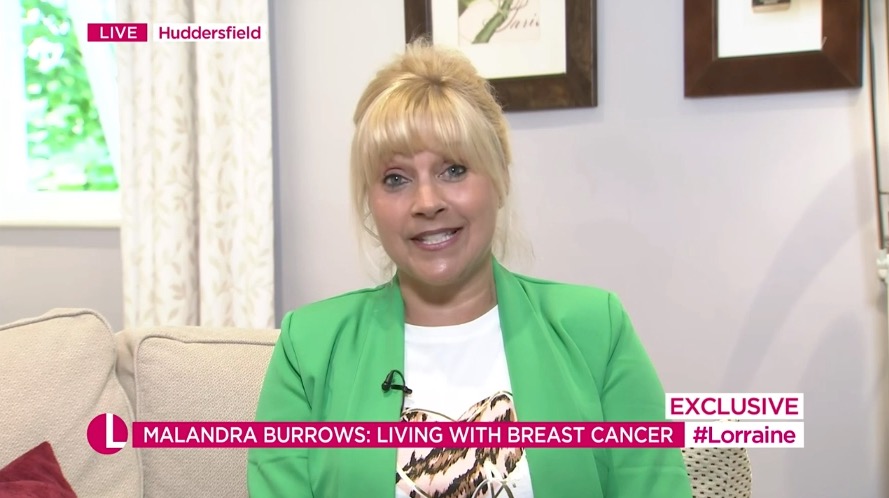 The soap star said that she was in ‘battle mode’, as she prepares to undergo radiotherapy, having had three major operations.

Speaking about how grateful she is to her dog, Malandra said: ‘I feel so blessed. I was one of those women who didn’t have any symptoms. Without that, I dread to think where I’d be now. It’s astonishing. I’m so thankful to her, I really am.’

She continued: ‘I’m straight into battle mode, and I have to mention, my other great inspiration has to be the wonderful, incredibly amazing Deborah James. And lots of love to you sweetheart, we’re all thinking about you. And thank you for the inspiration that you’ve given me. Thank you.’

Touched by Malandra’s message, Lorraine Kelly replied: ‘Aw Malandra, that’s so lovely. I know that will mean the world to her as well.

‘You know her campaigning has just been astonishing and life-saving.’

Lorraine praised Deborah for how she’s using her platform as a soap star to raise awareness of breast cancer.

‘That’s the thing as well, you can use… you know Deborah has used that. You can use the fact that everybody knows and loves you from Emmerdale, of course you’re a fixture in that show for so, so many years, and you can use that to help other people,’ she said.

In a filmed interview, Deborah broke down in tears as she opened up about the difficult conversations she’s had with her children about her death.

‘I have a really loving family who I adore and couldn’t… they’re just incredible,’ she said of her husband, Sebastien Bowen, and their children, Hugo, 14, and Eloise, 12.

‘And all I knew I wanted was to come here and be able to relax, knowing that everything was okay.’