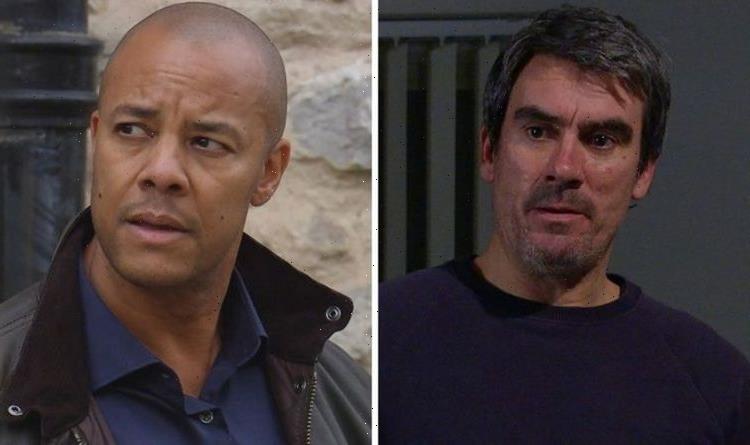 Emmerdale’s Cain Dingle (played by Jeff Hordley) and Al Chapman (Michael Wildman) have never seen eye to eye, and things seem to have become worse between the duo lately. In recent scenes in the ITV soap, Cain blamed Al’s son Ellis Chapman (Aaron Anthony) for his son Kyle Winchester (Huey Quinn) ending up in hospital. And, in a bid to get even, Cain drove Ellis out into the middle of nowhere and left him there to freeze.

The pair are already at war and the situation is made worse following the fire at The Woolpack.

Chas Dingle (Lucy Pargeter) and Marlon Dingle Mark Charnock) were left with no choice but to go into business with Al when their beloved pub was struggling for business.

In a bid to save the pub, Al offered to buy into The Woolpack.

However, since the blaze at Christmas, Chas and Marlon learned their insurance claim was voice because they failed to mention the development plans.

In upcoming scenes, despite Cain’s disapproval, Chas is forced to sign the papers to Al, who has drafted for ownership of The Woolpack.

Al is later left annoyed when newcomer Gavin (Ben Richards) tells him to offer Chas and Marlon less money for the pub.

However, when Paddy (Dominic Brunt) realises the change to the plans, Chas is left fuming.

Al cheekily decided to drop his offer by £20,000, and Cain ends up ripping up the contract.

As he reads through messages from Gavin, he hatches a plan with Cain to get some answers.

It doesn’t take the duo long to arrange a meeting with Gavin in the middle of nowhere.

Elsewhere, Chas is left no choice but to sign the papers from Al.

However, before she does, she makes sure Al agrees to end his feud with Cain.

Before long, Gavin informs Al of his run-in with Cain and Mackenzie and how he’s pulling out of the development deal.

Despite Al pleading with the newcomer, Gavin doesn’t change his mind and demands all of his money back.

Al is left terrified as Gavin threatens him and his family if he fails.

After the deal falls through, Chas is left furious with Cain and blames the mechanic for ruining everything.

Could Cain end up leaving the village after Chas cuts him out of her life completely?

If so, will he end up seeking his revenge on both Al and Gavin before making his exit?

Elsewhere in the ITV soap, Meena Jutla (Paige Sandhu) may finally be exposed after the villagers start working out her secret.

In the latest episode of the soap, Liam Cavanagh (Jonny McPherson) discovered where Meena had been holding Manpreet (Rebecca Sarker) and Vinny (Bradley Johnson) hostage.

After a chase through the woods, Liam ended up losing the nurse and getting lost himself.

Will someone find the doctor before it’s too late?