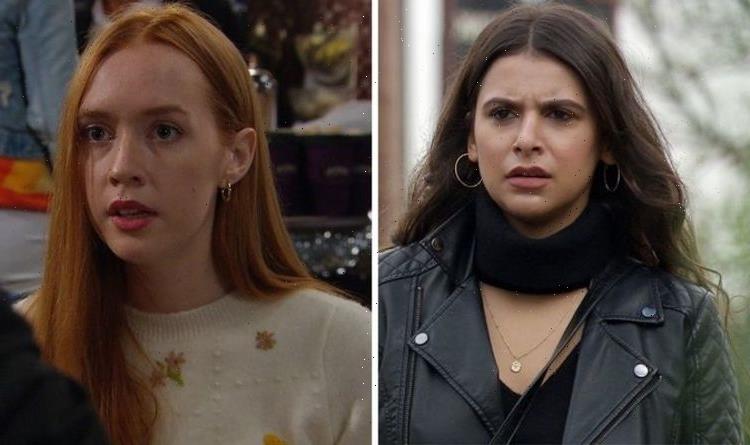 In recent weeks, Emmerdale viewers have watched in the hope evil Meena Jutla (played by Paige Sandhu) gets caught out for her murderous crimes. The most recent killing in the ITV soap was Ben Tucker (Simon Lennon) who Meena brutally killed after he had CCTV footage from the survival challenge that could have exposed her. Before that, the nurse left Andrea Tate (Anna Nightingale) to die in a burning maze, and she even murdered Leanna Cavanagh (Mimi Slinger) on her 18th birthday.

After Meena’s killings, she always takes an item from her victim as a trophy of her twisted victory.

In Leanna’s case, she stole her beloved ring, which Meena keeps stored in a first aid box.

Despite being nearly caught out before, Meena’s time may finally be up after Noah Dingle (Jack Downham) stole Leanna’s ring.

During Tuesday night’s episode, Noah barged in on Meena while she was looking through the items in the box.

Caught unaware, Meena shouted at Noah to get out after almost being caught red-handed.

“Don’t you knock,” the nurse raged. “I could have been naked.”

”It’s nearly lunchtime,” Noah hit back as Meena said: “So…”

“You should have locked your door,” Noah continued before Meena shouted at him again.

She said: “Don’t tell me what I should do. Get out! I don’t want your grubby hands all over my stuff, get out!”

Later on in the episode, Noah went back to Meena’s room and stole Leanna’s ring from the box.

The youngster took drastic action after his boss Eric Pollard (Chris Chittell) told him he wouldn’t get paid until the end of the month.

Unsuspecting Noah stole the ring so that he could give it to his love interest Chloe (Jessie Elland) for Christmas.

“Are you okay?” Chloe asked. “What are you hiding?”

“I can’t tell you it is meant to be a surprise,” Noah explained.

“Is it a Christmas present?” Chloe went on to ask. “I haven’t got you anything yet.”

The newcomer went on to tell Noah she probably wouldn’t see him on Christmas Day.

He said: “I could give it to you now, but it’s not wrapped though.”

As Noah presented the ring to Chloe she asked: “Is that an engagement ring?”

Noah laughed as he replied: “No, it is just a ring.”

As the pair chatted about their feelings for one another, Noah said: “I can get you something else.”

It is only a matter of time before Meena realises the ring is missing, but will she suspect Noah?

Could the evil nurse soon be exposed after Chloe works out it is Leanna’s ring?

Or will Meena set her sights on Chloe and kill her before her secret is revealed?