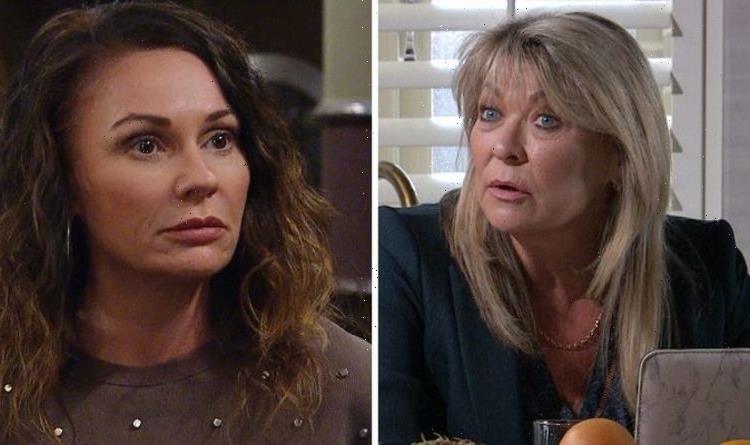 Chas Dingle (played by Lucy Pargeter) is set to take drastic action over Kim Tate’s (Claire King) blackmail threats against her husband Paddy Kirk (Dominic Brunt) in upcoming Emmerdale scenes. Chas was left furious when she discovered Kim had been threatening Paddy to dope her racehorses again on Friday’s instalment of the ITV soap. But just how far will Chas go to protect Paddy?

Landlady Chas is set to lock horns with Kim after becoming fed up with her controlling Paddy.

In Friday’s Emmerdale, Kim tried to blackmail Paddy into doping her horses at the races after he agreed to drug one earlier this year in return for money.

But when Chas discovered Kim had been blackmailing Paddy again, she told him she wanted to seek revenge on the businesswoman.

Will Chas hatch a plan to get Kim arrested so Paddy can finally move on with his life?

When Paddy arrived at Kim’s house on Friday’s episode she jibed: “You’ve finally made it – punctuality was never one of your strengths.”

Paddy snapped: “I’m a busy man, I can’t just come over here every time you click your fingers. You’re not my only client.”

However, Kim soon made Paddy feel guilty about her son Jamie’s (Alex Lincoln) death and her granddaughter Millie (Willow Bell) being taken away from her.

Kim said: “I suppose my latest loss is the talk of the town, well Millie has gone to stay with Andrea’s mum as we thought it would be for the best.”

Paddy tried to sympathise with Kim, before she quickly turned the conversation over to “business”.

She told Paddy she needed him to dope another of her horses so it would win at the races to give her a cash boost, but the vet was reluctant to help her.

“I am done with all that,” Paddy firmly stated to the scheming mother.

But Kim told him she was not asking for his help, she was telling him to help.

Paddy explained Chas knew about the doping scandal he was recently involved in and warned Kim that she’d “lost her leverage”.

“Well, I dare say the vet board would take a dim view if you were in cahoots with a dodgy bookmaker.

“Your money troubles are no secret, are they? And even if you weren’t struck off I doubt your practice would survive that kind of scandal?

“We all have to do things we don’t want to.”