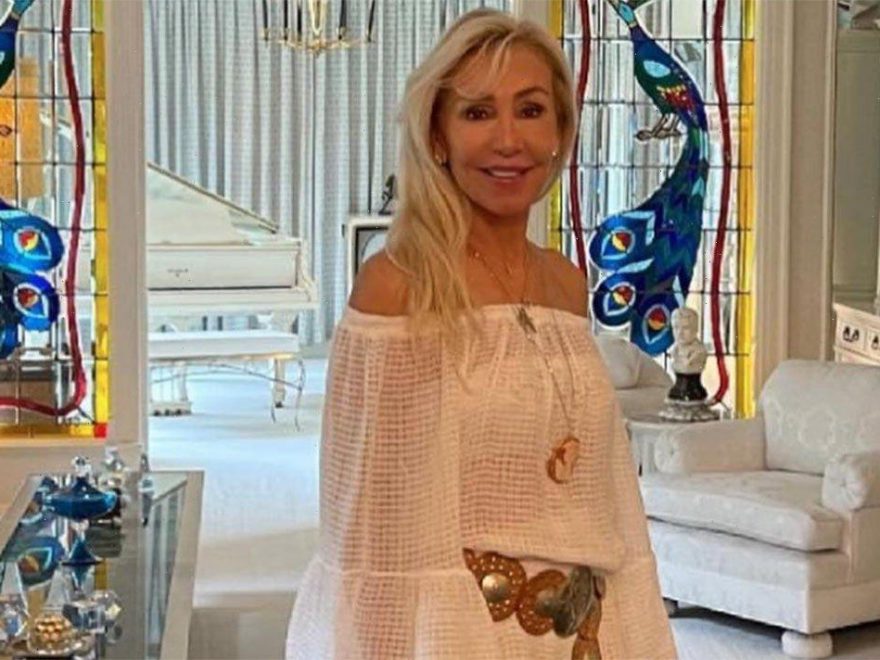 From the summer of 1972 to the end of 1976, beauty queen Linda was by Elvis’ side at home and on tour. Fans continue to praise her dignity and discretion, while Elvis’ cousin Billy Smith has paid tribute to their devoted relationship and how Linda “kept Elvis alive.” So her latest post is particularly powerful, since she rarely openly comments on the business of the Elvis estate, still overseen by Priscilla. It was also Priscilla who removed and replaced many of the changes Linda had made to Graceland, especially the stunningly opulent red and gold rooms that were inspired by Elvis’ “distinctive taste.”

Linda posted a series of images of herself at Graceland with the message: “No one can ever take away your knowledge of the TRUTH… Your memories indelibly etched forever… Your significance and importance in the lives of others…

“Carve out your own accomplishments & know your place in the world. No one can ever take that away from you… Carry the dignity of authenticity and wear it like a crown of honour! Your history and the grace in which you handle it is your legacy.”

Every part of the message is loaded with significance about her time with Elvis – and her underlying hurt at being erased from the upcoming movie. And the pictures she choose also have a very pointed and personal meaning.

Linda, who wrote an iconic Whitney Houston ballad about her time with Elvis, is shown standing in the main rooms downstairs at Graceland, in front of the iconic stained-glass doors.

She said of the interior: “I designed the stained glass peacocks leading into the music room, the climbing roses and ‘P’ stained glass at the front door. I also decorated the downstairs rooms, and the Jungle Room… All according to Elvis’s unique taste, of course. Really rarefied memories were made at Graceland.”

Those downstairs rooms became equally iconic as the site of so many wild nights with friends, particularly when Elvis would occasionally shoot one of the TVs in the gold, white and black lounge, with matching gold bar.

When Priscilla decided to open Graceland to the public, many of the existing decorations were changed, usually reverting to the more ‘tasteful’ and muted style Priscilla preferred.

The extremely opulent red and gold rooms of which Linda said, “Elvis loved the colour red, dramatic flair and the unusual” were completely redecorated, but you can see them in her own archive pictures.

However, the infamous “Jungle Room” complete with stuffed animals, was untouched, as was the unique games and pool room with its distinctive fabric-covered walls and ceiling.

Linda recalled it all on a previous visit: “I took a walk down memory lane today at my former home, where I lived for 4 1/2 years – Graceland in Memphis.

“I also revisited the airplanes that I flew on to countless concerts all around the country with the greatest entertainer who ever lived.

“It’s surreal to remember decorating with him the legendary jungle room, stained glass peacocks in the living/music room, the fabric-covered pool room, TV room and other areas – as well as the Lisa Marie airplane.”

“I will always be grateful for the rarified honor of having been so close on such a deeply personal level to such a true icon – and for having been loved by him.”

Although Elvis and Linda loved each other deeply, they amicably split when it became clear he could never change his womanising ways and settle down into domestic normality. However, they remained close and little Lisa Marie, who had grown up around Linda from the age of four, instinctively called her on the day they found her father dead in the room next to hers at Graceland.

Elvis went on to date Ginger Alden, while Linda would marry Bruce (later Caitlyn) Jenner, with whom she had sons Brandon and Brody Jenner. She later also married legendary record producer David Foster.

BAZ LUHRMAN’S ELVIS IS OUT ON JUNE 24