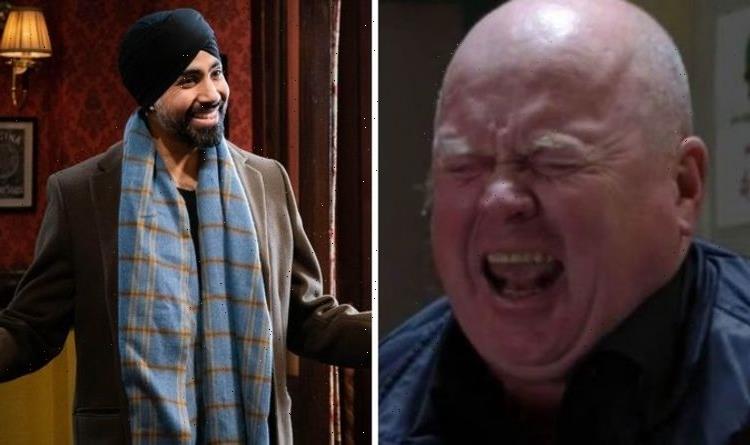 Long-term EastEnders character Phil (played by Steve McFadden) takes pride in fully being in charge of his questionable business and has firmly established himself as the head of the lucrative empire. But the classic BBC soap character’s days in Walford are numbered as he is at last potentially facing a long time behind bars. After coming to the decision son Ben Mitchell (Max Bowden) isn’t able to face taking over, he decides to sell. Will the Panesar family, who are rivalling the Mitchells in their growing power, take over?

In the past, Ben has been threatened by Kheerat Panesar (Jaz Deol) being involved in the Arches.

They clashed a few months back when Kheerat added a sign to the garage which read “Panesar’s” underneath the “Mitchell’s” sign.

“What’s that doing on my garage?” Ben fumed when he made the discovery.

Ben replied: “Yeah, but I thought you were going to be hands-off, so what’s changed?”

“When you own something, you want your name on it, same as yours,” Kheerat explained.

“Except you don’t know anything about fixing motors, do you?” Ben complained.

“I don’t need to, that’s your job,” Kheerat smirked. “I care about this place, Ben.”

Ever since, the two have been begrudging business partners.

Could the Panesars extend their ownership of Phil’s business, though?

In upcoming episodes, Phil is filled with guilt about not telling Kat Slater (Jessie Wallace) the truth about the extent of his prison sentence.

He tries to see his and Denise Fox’s (Diane Parish) young son, Raymond, but is blocked by Isaac Baptiste (Stevie Basaula) and Lola Pearce (Danielle Harold).

Following an out-of-character outburst at Lexi Pearce (Isabella Brown), the pair are concerned about Ben.

They advise Phil to worry more about his other son, who is clearly struggling.

Later, Phil visits Ben to confirm if he can handle the businesses but is quick to notice there is something wrong.

This causes him to reconsider handing over the business to his son, but how will Ben take the news?

At the police station, DCI Keeble tells him his fate and it isn’t likely to be good news for the EastEnders icon.

Kat and Phil both admit how they feel about each other in an emotional discussion.

Phil decides to visit Ben again and tells him he is selling the business because he doesn’t think he will be able to handle it.

However, Ben begs him to reconsider even though he knows he is not in a good place.

With Phil likely going to prison for a long time, one of his primary concerns will be leaving his empire in good hands.

Ben, who has been left traumatised by the recent attack on himself and his husband Callum Highway (Tony Clay), isn’t in the best position to take on more responsibility.

Phil will probably decide to sell the business, and it is possible Kheerat and his mother Suki Panesar (Balvinder Sopal) could express an interest.

Although the Mitchells and Panesars haven’t always seen eye-to-eye, Phil is likely to recognise the potential of the family.

With the classic character potentially leaving the soap, could the Panesars become the new power family in Walford?

With their connections and experience, they seem best-placed to take over Phil’s dodgy businesses.

EastEnders continues on Thursday at 7.30pm on BBC One.