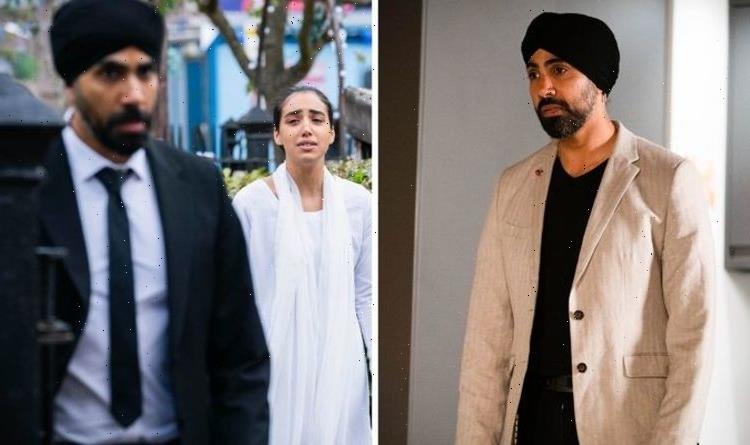 The close-knit EastEnders family have been trying to adjust to the loss of Jags, and still have no idea that he died because Ben Mitchell (Max Bowden) stopped the protection set up for the Walford resident in prison in an act of revenge against the Panesars. Jags’ funeral takes place next week, and viewers of the BBC soap can expect more heartbreak as Kheerat (Jaskiranjit Singh Deol) struggles to get through the funeral. Suki Panesar (Balvinder Sopal) is angry at her son for not being there – will Kheerat leave the Square?

But on her way to the stock room, the grieving mother has a bit of a wobble.

From her observations, Honey is sure Suki isn’t eating to punish herself for Jags’ death and his determined to help her.

As the hearse arrives, the Panesar’s are devastated and an overwhelmed Kheerat walks out.

As the funeral continues, grief overcomes Suki, and Ash Panesar (Gurlaine Kaur Garcha) finds Kheerat, who is a wave of emotions.

But she can’t convince her brother to come back to the funeral.

Back at the Panesar’s, Honey visits Suki to try to give her some encouragement. Suki scolds an ashamed Kheerat for missing Jags’ funeral.

Later, Honey brings a lasagne, and Suki takes a small bite. Ash sees them talking surprised but happy her mother is looking better.

But a heartbroken Kheerat will be left feeling even worse after Suki’s telling off.

As the oldest brother, he feels a lot of responsibility for what happened to Jags, and with Suki too lost in grief to notice his pain, he may find life on the Square too hard to carry on with.

Jags was sent to prison last year after being set up for a robbery he didn’t commit.

A fellow inmate killed him last month, and the family have been struggling to come to terms with the news.

Ash actress Gurlaine recently said in an interview with Digital Spy that Jags’ death would have a huge impact on the whole family.

She said: “The viewers are going to see this change among the family and also how it impacts their relationships with each other, and also other characters too.”

Could one of the changes be the temporary absence of Kheerat?

With the brother feeling more and more guilt about Jags, it seems likely he will decide to cut ties with the family for a while.

But all members of the family feel a great deal of guilt. It was Suki who framed Jags for the robbery on Ruby’s nightclub after discovering he’d been dating Habiba behind her back.

They had arranged protection for Jags in prison through Ben, but he abruptly put a stop to this after finding out that Kheerat was dating Sharon Watts (Letitia Dean).

At the moment, the family have no idea about Ben’s part in Jags’ death, but if Kheerat does work it out, he’s likely to blame himself even more.

He will likely be unable to stick around to support his grieving family if he believes Jags would be alive if he hadn’t begun dating Sharon.

But if he does leave Walford, what will happen to the rest of the family?

Kheerat is usually the one to keep on top of things with his siblings, so could the family be left further torn apart if he leaves?

Perhaps Sharon could convince him to stay, but once he learns what Ben did, will the a bereaved Kheerat lash out at Sharon too?

EastEnders continues on Monday at 8pm on BBC One.