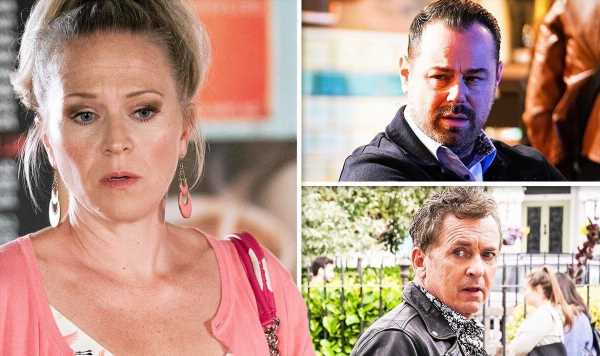 Linda Carter (played by Kellie Bright) has been doing her best to get her life back on track as she continues to recover from a car crash that EastEnders viewers will know was caused by Janine Butcher (Charlie Brooks). However, after discovering Janine is pregnant with Mick Carter’s (Danny Dyer) baby, will she find herself in the arms of another man?

Last week, Linda mustered the courage to tell Mick how she really felt about him.

The Queen Vic landlord has been helping her win back custody of baby Annie and has been a pillar of support for the recovering alcoholic.

Janine has grown increasingly jealous as she watched the pair grow close again from the sidelines.

However, after initially considering terminating her pregnancy, Janine was thrilled when Mick revealed he wanted to raise their child.

Janine smugly announced the news in front of the square including Linda but instead of driving her to fall off the wagon as Mick feared, Linda may finally move on. 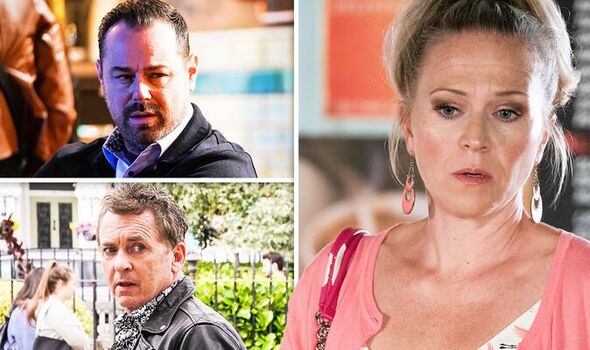 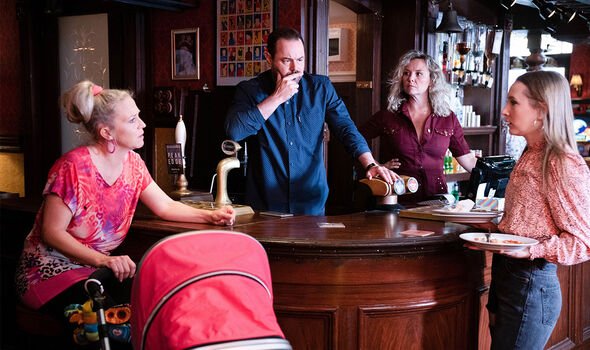 Opening up on Alfie’s mission to win back Kat, Shane admits his character will never give up on her.

He said: “20 years later, all the things that have happened to between Kat and Alfie, and there’s still a spark and this was clever, this is what [executive producer Chris Clenshaw] created.

“So now Alfie’s become Phil Mitchell’s almost-nemesis and there are some wonderful scripts where Alfie is calling Phil – to his face – Mr Potatohead or Gru from Minions.

“And that is the only reason why Alfie knows he can get away with it because he knows Kat is standing there and Kat won’t let anything happen to him while she’s in the room.” 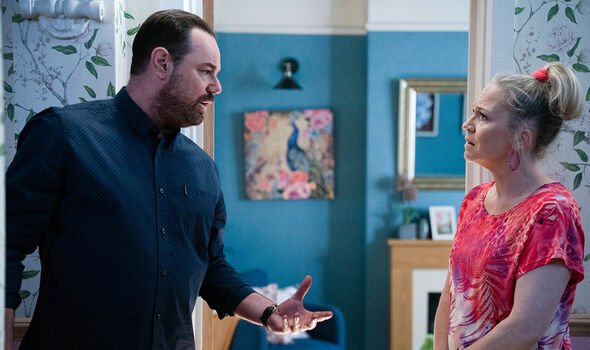 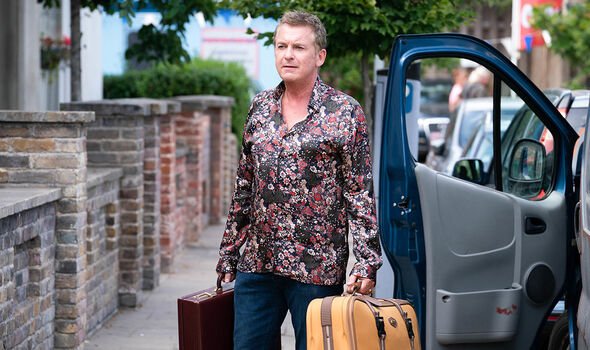 Shane continued: “Our Alfie still burns a candle for Kat and he’s trying to convince Kat that she feels the same.

“I’ve been on the show now six weeks, and my backside hasn’t been home – and I’m playing some wonderful stuff with Kat and Alife, where you’re going, ‘Will they? Won’t they? Oh no, that’s not going to happen…'”

As Kat tries to continue on with her life with Phil, Shane teased Alfie may grow close to another Walford resident.

The “EastEnders star teased: “Is Alfie using Linda to get to Kat?”

Will Linda turn to Alfie for comfort as the recovering alcoholic tries to move on from Mick?

The unlikely duo have both owned the Queen Vic during their time in Walford and may have more in common than fans might think.

If Kat tells Alfie once and for all that she sees her future with Phil, Linda could offer a shoulder to cry on.

Both of them have made mistakes over the years and are now watching the love of their lives move on with someone else.

Meanwhile, Shane revealed he noticed a change when he returned to the BBC soap.

“It’s strange – a good strange. It’s very different now. Last time, I came in to do a storyline where Alfie got pushed down the stairs and I left to go and do something else,” he explained.

“As you know, I do a lot of theatre and touring in theatre companies. Coming back, with the cast, the producers and directors and writers, there’s a real sense of a theatre community.

“The way it’s changed now, I think it’s down to Chris Clenshaw because he’s grown up with this show. It’s in his DNA and he knows how people work. I’ve come back and I feel like I’m part of something that’s so strong at the moment.

“It feels like a touring production – all these actors and writers and producers, and we have access to each other’s lives right now. Forget what’s happening on screen, what you see on screen is a result of what’s happening behind the cameras and after being here 20 years ago, some of the camera guys are still the same.

“But also I never used to get access to the writers. Chris has come along and said: ‘Right this is not just about the actors or writers or producers or directors, everybody’s in this together’ and coming into that is a real buzz.

“Everyone really does care about each other and the direction we’re going in now feels so strong.”

EastEnders airs on BBC One from Monday to Thursday at 7.30pm.