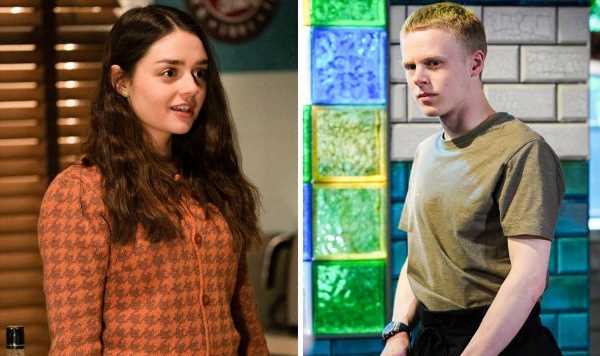 Official EastEnders spoilers confirm that Dana (played by Barbara Smith) will get close to a troubled Peter Beale (Dayle Hudson), and things could take a surprising turn. Fans of the BBC soap will be stunned if the couple end up sleeping together, but in a drunken state, Peter isn’t in his right mind and could betray his brother. To make matters worse, could Dana end up pregnant after her night with Peter?

Things get set in motion when rapist Lewis Butler (Aidan O’Callaghan) is riled when Kathy Beale (Gillian Taylforth) fires him.

It comes after she learns about what he did to her son Ben Mitchell (Max Bowden).

Having lost his job at The Albert, Lewis is fuming and out for revenge.

He retaliates by informing Peter that Ben is the one who attacked him.

Ben launched a violent assault on Peter a few weeks ago after mistaking him for someone else, but up until this point, the latter had no idea who attacked him.

Things remain awkward between Bobby and Dana as the latter rejoins the team after taking her job back.

She quit soon after she and Bobby broke up, so things are bound to be slightly weird between the pair.

After an incident involving a customer at the restaurant, Peter and Dana end up having a heart-to-heart.

Later, Kathy Beale is stunned when a drunk and enraged Peter tells her he knows it was Ben who attacked him.

Wanting Kathy to prove her loyalty to him, he asks her to report Ben to the police.

Knowing what she knows about Lewis, Kathy is unlikely to do this, which will hurt Peter further.

Dana later covers for Peter when Kathy tries to find him.

The youngster also finds a touching gift from Bobby, but she incorrectly assumes it’s from Peter.

She goes to find him and misreads the situation, leaning in for a kiss.

Normally, Peter would never betray his brother in such a way and would back off, explaining to Dana she’d got the wrong idea.

However, having been drinking all day and feeling betrayed by his family, it’s possible he may kiss Dana back.

One thing could lead to another and the two might find themselves spending the night together.

It’s likely the two will realise what they have done and try to move on and keep everything a secret, but their night together is likely to be exposed somehow.

Perhaps Dana becomes pregnant and knows Peter is the father.

By the time she finds out, she may even be back together with Bobby, knowing nothing can go further with Peter.

If she tells Peter, he might tell her to pretend that Bobby is the father.

This could lead to a web of lies which will undoubtedly conclude in a big reveal.

Although they might keep their secret for a while, it’s bound to come out.

How will Bobby react when he learns about his brother’s betrayal?

Bobby might be delighted at first when he thinks Dana is carrying his baby.

It’s possible he will be ready to take on his new role as a father before finding out the terrible truth.

Could the family be torn apart when the bombshell is dropped?

The Beales have already been through their fair share of lies and deceit, but it seems the drama isn’t over for the family.

EastEnders continues on Wednesday at 7.30pm on BBC One.