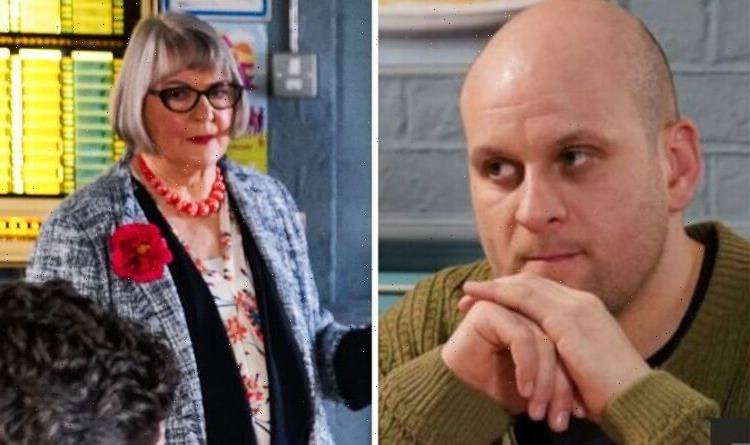 EastEnders: Stacey fumes at her mum for dating Harvey again

Vi (played by Gwen Taylor) left the BBC soap last year and her family hasn’t heard from her since. The outspoken EastEnders character is confirmed to be making a comeback though, as pictures show her in the Walford cafe with Stuart (Ricky Champ). Could she return to the soap and be the one to get through to Stuart about getting medical treatment for his cancer, which he insists he doesn’t need?

Vi left on bad terms with Stuart in November last year after he kicked her out when he realised she’d given a child up for adoption.

When he found out she had given her son up later in her life, he became furious because it meant she could have looked after him.

“Wait, he’s only 35?” Stuart asked as they spoke about her decision and he worked out the dates.

“Well, your grandfather walked out on me,” Vi explained to a shocked Stuart.

She added: “I was lonely. I’m not proud.” Stuart, however, didn’t want to hear it.

“So, you were pregnant when I was 10,” Stuart pointed out.

He continued: “When you were too sick to have me and they put me into care?

“I kept telling them, ‘let me go and live with my nan, my nan loves me even if no one else does’.”

“I couldn’t have people knowing,” Vi commented, trying to make her grandson understand.

Stuart fumed: “So you let them put me into a home to save you losing face? And then you slung your own kid in after.”

He yelled: “Do you know what it was like in care? Going to bed each night knowing no one wants you?”

“This ain’t about you,” Rainie argued, trying to defuse the situation.

Stuart continued, though: “Hoping you don’t wake up in the morning with your head kicked in or someone trying to touch you up?”

“They said you’d be looked after,” Vi sobbed as Stuart exploded with anger.

“You lied to me,” he screamed as he began to knock things over.

He eventually asked Vi to leave and, despite having a change of heart later, it was too late and she had gone.

Soon after, Stuart was diagnosed with breast cancer, and he has since refused treatment.

Could Rainie, who is failing to make him see sense, track Vi down knowing she might be able to persuade her grandson to have the surgery?

Stuart normally listens to his nan’s advice, so getting her to try to change his mind on the subject might work.

He is also likely to be pleased to have her back and might be willing to try anything to keep her around.

Will he finally decide to have the cancer treatment if Vi turns up and convinces him it’s the right thing to do?

Thursday’s episode saw him make a return to the Square after months away and he told Rainie he had recovered from cancer after receiving holistic treatment.

He told his wife: “I got a second opinion, I’ve been having treatment.”

He added: “A doctor has given me the all-clear, my cancer has shrunk.

“I know it sounds crazy, but this is what me and you do, isn’t it? Crazy.

Both Callum Highway (Tony Clay) and Rainie were left concerned, and unsure of how to get him to go to his hospital appointments.

Perhaps Vi will succeed in talking him around, meaning Stuart will have a much better chance of recovering from cancer.

Will he make the life-altering decision to have the recommended surgery?

EastEnders continues on Monday at 8pm on BBC One.