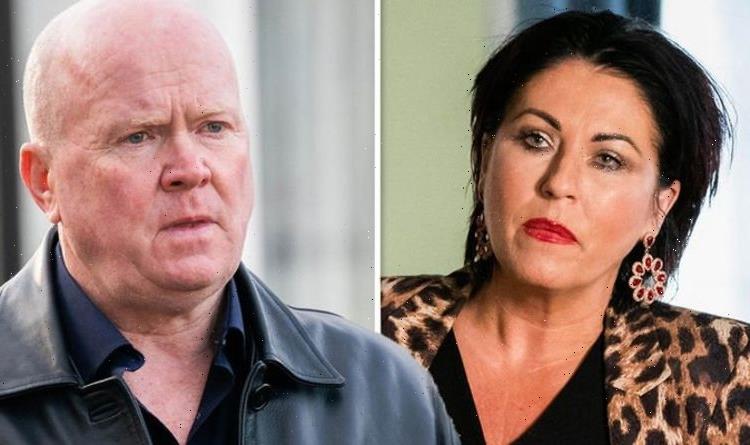 Kat Slater (played by Jessie Wallace) is worried about her son Tommy Moon (Sonny Kendall) and is unsure whether to take Phil Mitchell’s (Steve McFadden) advice and encourage his passion for football. However, if the EastEnders hardman makes it clear he wants to do whatever it takes to help her son, will the couple relocate in a bid to launch Tommy’s football career?

In tonight’s EastEnders, which is available on BBC iPlayer as part of the BBC soap’s boxset, Phil and Kat discussed Tommy’s future.

Phil told Kat she should consider the positive comments made by Harry Redknapp during his cameo last week.

“It’s one hour after school,” he replied and she hit back: “That Harry Redknapp has really turned your head, hasn’t he?

“Where has running up and down a field ever got anyone?”

“You are joking, right?” Phil asked and Kat explained: “Even if Tommy does the trial and Epsey Town take him, he’s still behind with his spelling.

“He and Burt are on the same reading book, he’s got enough on managing his dyslexia.”

“If he doesn’t try for it, it’s guaranteed it won’t happen, this could be Tommy’s chance.”

Later, Kat was disheartened when she bumped into Kim Fox (Tameka Empson) in the cafe.

Kim gloated about her daughter’s achievements at school while Kat tried to hide her surprise.

Pearl is six years old while Tommy is 10 and Kim made it clear her daughter was acceding academic expectations.

Denise Fox (Diane Parish) wants to stop Phil from spending time with their son and the dodgy dealer fears he’s running out of options.

If Kat agrees to let Tommy try out for a local football team, Phil may look into training camps and giving the youngest the best chance to succeed.

Will he suggest relocating with Kat away from Walford so Tommy can spend the summer at a football camp?

Elsewhere, EastEnders fans are thrilled with Kat and Phil’s romance.

The Slater matriarch has been giving Phil advice on how to spend more time with Raymond and persuaded Denise to let him see his son more.

One pleased viewer tweeted: “Kat Slater is the best thing to happen to Phil Mitchell in years! #EastEnders.”

“Kat is the best thing to ever happen to Phil in recent years!! #eastenders #phat,” another wrote.

“Kat washing Tommy’s football boots. On another note, Kat is the best thing that’s happened to Phil. #EastEnders,” someone else shared.

A fourth remarked: “Every Kat and Phil scenes makes me realise more and more just how much better Kat is for Phil than Sharon #EastEnders.”

EastEnders continues tonight on BBC One at 8.05pm.