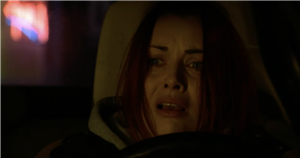 EastEnders fans were left on the edge of their seats on Tuesday night as Whitney Dean (Shona McGarty) propelled her car towards Ben (Max Bowen) and Callum's (Tony Clay) wedding ceremony.

Phil Mitchell (Steve McFadden) was left furious at the start of the latest episode of the BBC One soap as he learned that his new son-in-law Callum was spying on him for DI Thompson.

"A grass living in my house?" Phil shouted at Kat, who was trying to calm the situation.

The Walford hard man later caught up with Ben and Callum and all hell broke loose between the trio.

Phil told his son: "This is between me and him" as Kat ran over to the group of feuding men.

Elsewhere in Albert Square, a grieving Whitney could be seen yelling: "Why does Ben get to have a happy ever after when he stole mine twice?" before she picked up her a set of car keys.

With bright lights glaring in their eyes, Whitney suddenly screeched around the corner in her car, picking up speed as she piled the vehicle towards Callum, Kat, Ben and Phil.

She shrieked before any sort of impact, leaving us to wonder whether she hits anyone.

EastEnders airs Mondays, Tuesdays, Thursdays and Fridays on BBC One