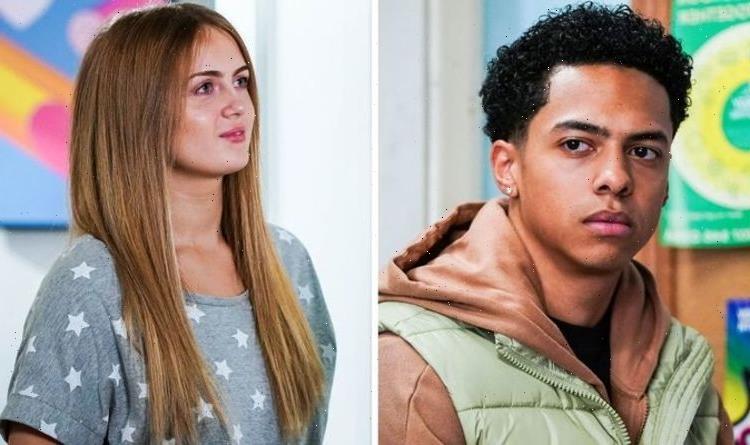 EastEnders: Maisie Smith on her exit and possible return

EastEnders’ Keegan Baker (played by Zack Morris) has been left in tatters after his wife Tiffany Butcher-Baker (Maisie Smith) left Albert Square once and for all earlier this week. Tiffany thought her husband no longer loved her and decided to jet off to Germany with her brother Liam Butcher (Alfie Deegan). Keegan, who hoped he’d be able to reconcile with his wife, has been left devastated by her exit. Will he decide to flee Walford as well to try and move on from her?

Walking towards Keegan’s table, Aaron asked: “Is this the ‘Tiff dumped me’ club? Where do I join?”

He sat down with Keegan, uninvited, and added: “Listen Keegan there is no reason me and you can’t be civil now is there?

“I’ve got to be honest, out of everyone around here, you’re the one who is most like me.

“You’re ambitious, you’re family orientated, and I don’t think we are all that different.

“When you’re both after the same girl it’s survival of the fittest, isn’t it?

“But I’ll hold my hands up, as it’s my fault. As soon as I realised you two were married I should have backed off – I’m sorry.”

Aaron asked Keegan what it was like being married to Tiff, to which he explained: “I liked it – did you never get close?”

“No, I want to have a million pounds first,” Aaron quipped.

A sorrowful Keegan then downed the rest of his drink and told Aaron he needed to get back to work.

As Keegan got up to leave, Aaron added: “Listen, mate, when you have a bit more time we can make a session out of it right?”

Tiffany made her final appearance on the BBC soap earlier this week when she left the Square with her brother Liam after being left heartbroken again.

She broke up with Aaron after he snapped at her and wanted to reunite with Keegan after sharing an emotional moment with him.

After spending the night together Tiff decided to write Keegan a letter – which did not go unnoticed by a prying Liam.

She handed the letter to Keegan with instructions to meet her by the Underground before she left Walford.

However, when he opened the envelope he found nothing more than signed divorce papers, leaving him devastated. Without Tiffany noticing, Liam maliciously switched the letter.

Keegan has been beside himself since Tiff left the Square and cannot seem to get her out of his mind.

With every part of Albert Square reminding him of Tiff, will the businessman decide to leave Walford to try and start a new life?

EastEnders airs Mondays, Tuesdays, Thursdays and Fridays on BBC One.