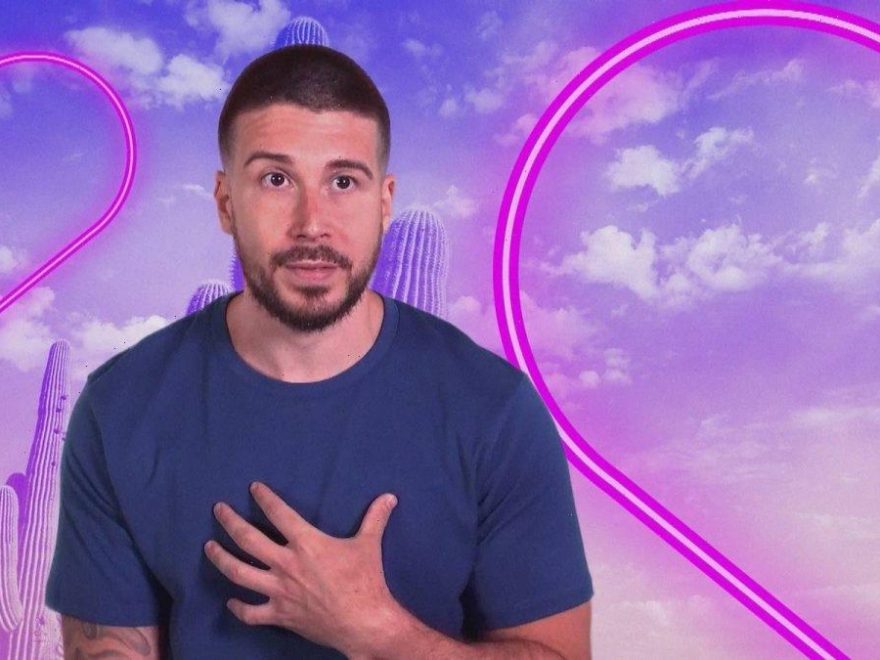 During the Double Shot at Love premiere, Guadagnino pulled a producer off to the side. “I know what I’m supposed to do here, but I gotta buy one more night,” Guadagnino tells them. Feeling like he didn’t have a chance to get to know anyone, Guadagnino canceled the first elimination. No one was sent home their first night in Arizona.

After a call from Nikki Hall, Maria Elizondo visits the Arizona resort to help Guadagnino search for the right match. She says there’s no bad blood between them and even thinks Guadagnino might have sex with her again.

Elizondo’s visit is quick, but effective. Throughout the episode, Maria connects most with Kyra Carey, who is shy and having difficulty connecting with Guadagnino.

Later, Guadagnino sits down with Akielia Rucker. The two share a kiss — the first of the season for the reality star.

After postponing the first elimination, Guadagnino changed the setup. Instead of doing things Bachelor-style, Guadagnino invited some of the women to an intimate dinner.

Jasmine Jones, Kiana Khoshaba, Erica Pecore, and Kyra all sat down for a meal with Guadagnino. “I wanted to spend some time with you tonight to help me make my decision,” he tells them. “Because this is also an elimination.”

“JJ, Erica, I really love your fiery personalities for sure,” Guadagnino says. “I would like to take the time to get to know you guys more,” he adds.

Ultimately, Guadagnino sends Kyra and Kiana home. “I kinda just get a friend vibe and not a romantic vibe,” Guadagnino tells them. “Kyra is kinda quiet, I know she’s a shy girl, [but] at some point I’m going to have to speak to you,” Guadagnino tells cameras later. Meanwhile, Guadagnino feels Kiana wasn’t there for the right reasons.

“Very hard to make decisions with so little time but that’s the name of the game!” Guadagnino tweeted during the episode. “See you next week!”

Tune in next week to find out who Guadagnino connects with on Double Shot at Love Season 3. New episodes air Thursdays on MTV.