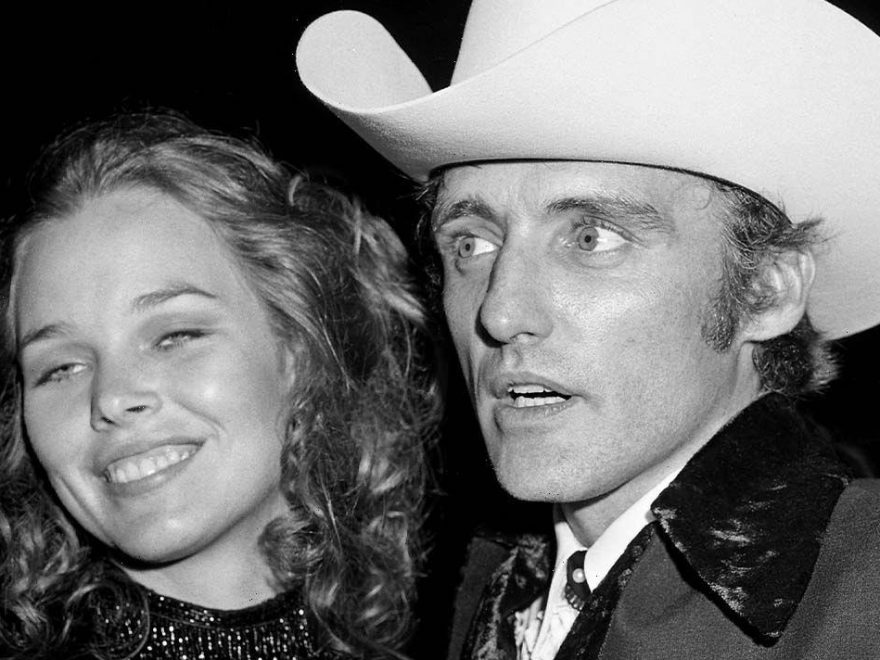 Dennis Hopper plays a terrorist who has planted a bomb on a bus in the 1994 film ‘Speed’ on ITV tonight. His character, a deranged former bomb squad officer, rigs the vehicle with an explosive that will detonate if its speed dips below 50mph. The maniac demands a multimillion-dollar ransom and threatens to let off the bomb if any of the terrified commuters leave the bus.

The action thriller also stars Keanu Reeves and Sandra Bullock, who heroically try to save the passengers.

High-speed sequences and death-defying stunts leave viewers on the edge of their seats in this classic blockbuster.

Besides ‘Speed’ Dennis had a string of other high-profile roles in classics such as ‘Cool Hand Luke’ and ‘Blue Velvet’.

Many of his performances were highly acclaimed, however away from the cameras the star led a wild life.

The Hollywood star’s party lifestyle, fuelled by drugs and booze, led him into a string of crazy encounters throughout his career.

One such escapade saw him marry Mamas and the Papas singer Michelle Phillips on Halloween in 1970.

The two stars tied the knot in Taos, New Mexico, the burial place of the writer DH Lawrence.

Dennis had just finished the classic film ‘Easy Rider’ and had been shooting his next production, ‘The Last Movie’.

Michelle landed her first film role with the production in Peru and she and Dennis married shortly after back in the US.

However, their union was short-lived, lasting just eight days after she filed for divorce in Los Angeles.

The Daily Mail reported in 2010: “The morning after the wedding, he woke up so stoned he didn’t recognise his bride.

“The marriage lasted a week; Phillips has always said she divorced him because of his unnatural sexual demands.”

In an interview with Vanity Fair magazine in 2007, she called what Dennis did during their brief time together “excruciating”.

She told the publication: “My father dragged me into his attorney’s office and said, ‘Men like that never change. File for divorce now. It’ll be embarrassing for a few weeks, then it will be over.'”

“It was embarrassing for more than a few weeks.

DON’T MISS:
Christopher Plummer acted ‘like arrogant b******’ on Sound of Music set [LATEST]
Clive Myrie once admitted impact of war was ‘difficult to shake’ – ‘Images stay with you’ [INSIGHT]
Dolly Parton ‘crushed’ by tragic death: ‘Like I’d lost a baby of my own’ [ANALYSIS]

“Everybody had the same question: ‘A divorce after eight days? What kind of tart are you?’”

The singer added that she and Dennis were “civil” whenever they bumped into one another.

Screenwriter Stewart Stern, who worked on ‘The Last Movie’ and was a guest at the wedding, described the unusual ceremony in an interview with Uncut magazine in 2014.

He said: “He got married reading ‘The Gospel of St Thomas’ aloud to Michelle.

“He decorated the whole place with candles stuck in paper bags. It was a whole mixed mystical thing.

“He read the whole marriage ceremony, and it was just craziness.”

Dennis gave his own account of his and Michelle’s nuptials during a 2001 interview with the Guardian.

He said: “Oh Michelle. Well, we were married for eight days and we did everything we could possibly think of.”