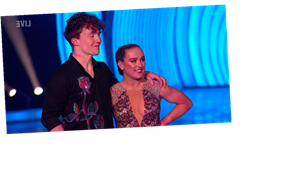 Dancing on Ice viewers were stunned on Sunday evening as Amy Tinkler became the latest celebrity to leave the competition.

The 21-year-old former gymnast looked visibly upset as the judging panel chose to save Lady Leshurr and Brendyn Hatfield in the skate off.

Amy hugged professional skater Joe Johnson as the news sunk in and described him as "the best partner ever".

Amy joined the competition in week three after replacing Denise van Outen, who was forced to quit after injuring her shoulder.

Viewers watching at home were also sad to see Amy go and took to Twitter to share their opinions.

One person posted: "So sad to see you guys go. You both had so much more to give but the journey you did have certainly impressed all of us at home. Looking forward to seeing what you’ve both got lined up next."

Another fan tweeted: "Ahh…such a shame #AmyTinkler. You are truly an inspiration and deserved to stay!! Damn the ice panel!!"

A third person fumed: "Outraged. Amy so should have stayed! Throughly disappointed with that result! #DancingOnIce."

Someone else branded the show a "fix" and tweeted: "Honestly Judges what program where you watching because it certainly was not Dancing on Ice.

"Lady Leshur should have went absolute total fix. Think it’s time for a new panel or should have gone to spec savers."

It was a rather emotional edition of the ITV show this weekend as former Coronation Street actress Faye Brookes was left tearful due to the judges' comments.

And there were some celebs missing from the ice this week as Jason Donovan was forced to sit out due to back pain, and Emmerdale star Joe-Warren Plant left the competition after testing positive for coronavirus.

It's not exactly been smooth sailing for the ITV show this year as Denise van Outen quit the show due to an injury, and Rufus Hound also had to pull out due to Covid-19.

Some viewers watching at home felt that there shouldn't have been an elimination this week due to the absence of Jason and Joe-Warren.

One tweeted: "At this stage in the competition, surely if someone is missing through injury, the fairest thing to do is cancel the elimination and have a double next week… Doesn't seem that hard to organise #dancingonice."