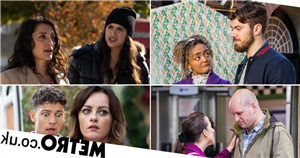 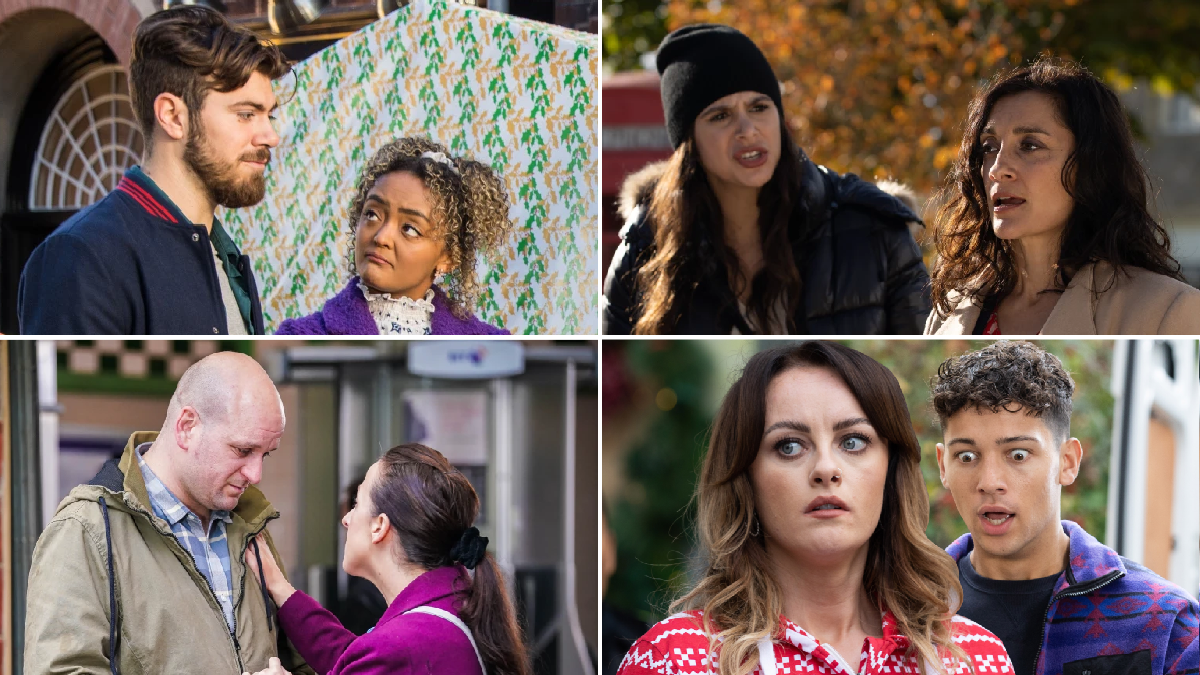 The festive season is rapidly approaching, and that can only mean one thing in the land of soap: drama aplenty!

Curtis Delamere decides to take part in a challenge in Coronation Street, but questions are soon raised after he makes a swift exit, while EastEnders’ Stuart Highway receives a devastating diagnosis.

Emmerdale’s Aaron Dingle, meanwhile, visits Liv Flaherty and explains that he doesn’t think he can support her any more, and Hollyoaks’ Becky Quentin is up to no good once more.

For a more in-depth look at next week’s soapy shenanigans, have a butchers at our guide, featuring all the biggest moments!

1. Amy and Asha scroll through Daisy’s social media posts, admiring her tiny waist. Summer puts her sandwich down. Summer sways slightly, admitting that she skipped lunch, but Daniel grabs her arm to steady her, before slipping an energy bar into Summer’s bag. Max catches the act on camera, and accuses Daniel of abusing his position with Summer, claiming he has proof. Daniel takes Summer to one side and tells her about Max’s allegations. Mortified, Summer vows to put him straight. But when Summer belittles Max, she has no idea of what she’s unleashed, as Max does his worst.

2. In the wake of recent events, Summer assures Billy and Paul that Daniel is entirely innocent. Mrs Crawshaw interviews Max and Daniel, determined to find out the truth. Max shows her the film and poem he found in Summer’s bag, while Daniel assures her that he has never behaved inappropriately with a pupil. Summer confirms to Mrs Crawshaw that Daniel’s done nothing wrong. But when she confides in Paul how she and Daniel connected emotionally but he couldn’t act upon it because of his position, Paul’s horrified, convinced he was grooming her.

3. Summer reiterates that Daniel had a girlfriend this whole time, railing at Paul for interfering. She subsequently seeks out Daisy, explaining that she had a huge crush on Daniel, but he only ever showed her kindness. Can Daisy help him out? That remains to be seen, but Max later tells Mrs Crawshaw that he wishes he’d punched Daniel harder, resulting in her recommending a permanent expulsion!

4. Curtis wants to train for the Three Peaks challenge in aid of Oliver’s fund, but Emma is concerned for his health and offers to do it with him. Curtis, however, asserts that he wants to do it on his own. But there’s more going on than meets the eye, as the trainee doc later leaves the challenge, and meets with a charity worker to discuss his condition at the golf club.

5. Fiz is not a fan of the party arrangements Phill and Mimi are making, and she feels unsupported by her man. After a heart-to-heart with Tyrone, however, she tells Phill exactly how she feels about his mother! The party commences, and Fiz is uncomfortable, prompting Ty to take Mimi aside to have a word with her. Mimi’s microphone, however, is switched on during the conversation! How much has been heard?

6. Kelly accuses Yasmeen of torching the restaurant deliberately in an arson attack, and the police soon start to suspect the same thing, resulting in Hashim paying Zeedan a visit. He resorts to threats, but soon he sinks to his knees and clutches at his chest! Will he be okay? The jury is still out on that one, but Zeedan later tells the police everything, while also blaming Hashim for the fire!

7. Sarah attends a meeting with client Gavin and his PA, but as they strike a deal, Lydia thinks Sarah might be unwell, and wonders if she’s pregnant. Sarah later tells Adam she thinks she might be expecting, leaving Adam excited.

8. Kim confronts Phil, telling him she knows all about how he threatened Howie, not to mention the fact that Vincent is dead! Phil, meanwhile, confides in Kat, explaining that he didn’t kill Vincent. Kat tells him to tell Kim everything, and he ultimately does just that, warning her not to say anything as Aidan could get involved and make matters worse.

9. Kim is in for yet another shock, as she catches sight of Pearl’s school invoice and puts two and two together. She confronts Denise, questioning her about whether or not she knew about Vincent’s death this whole time. Denise ultimately comes clean, admitting the truth, which leaves Kim utterly devastated!

10. Stuart is acting shifty, as he receives a text confirming his doctor’s appointment. Sonia thinks he’s not himself as well. Stuart later goes to the doctor’s office, where he’s gobsmacked to learn the truth. Afterwards, he drinks heavily in The Vic, and Sonia decides to take him home. She offers him support, as he tells her everything – that is, before he snaps.

11. Jay is shocked when a customer confronts him about selling stolen cars and threatens police involvement.  He confronts Janine about the stolen cars wanting to call the police, but Janine makes it very clear – it’s his name is on all the forged documents.

12. A very high phone bill leaves Jay confused, and he promises Honey he will sort it out. After a conversation with Ben, however, he realises that Janet has been calling Lexi from Miami.

13. Dana contemplates converting to Islam, and thus asks Iqra for some advice. Aaron, meanwhile, gets in Bobby’s head about his role in Christmas festivities as a Muslim, which makes him extremely anxious. Dana is horrified to learn of her brother’s actions, and thus confronts him, telling him she’s thinking about converting.

14. Eve and Stacey leave Kioni in shock as they tell her all about the horrors of prison life. Mila is not pleased, and thus storms over to them – angry that Kioni is now upset about what their mum may go through. Eve is apologetic and explains they thought they were doing a wayward teen a favour, and she leaves Mila mulling over whether she should let Kioni visit her mum.

15. Aaron struggles to find the strength to support Liv in court following Ben’s death. He arrives outside the court at the same time as Belle, Sam and Vinny, but reveals he needs some time to compose himself. Chas confides in Cain over her worries, fearing Aaron will do a runner.

16. Liv is relieved when Aaron visits her in the court sideroom. He worries that they bring each other down, and struggles to hold it together. Liv fears that this could be his last goodbye to her. Having lost Ben, Aaron tells her he doesn’t have the strength to keep supporting her anymore. Liv pleads with him to reconsider, but will heartbroken Aaron leave her to face her fate alone?

17. Manpreet is not pleased that Meena has been playing games with Ethan’s happiness, after she told him to refrain from contacting his mum. Meena claims she was doing it to protect Manpreet’s involvement over the fake texts that were sent several months ago, but Manpreet’s having none of it, telling Ethan he should give Esme another chance.

18. Charles expresses his gratitude for her help, and he and Manpreet reminisce on happier times. Manpreet leans in for a kiss, but he pulls away. He tells Manpreet that now isn’t the right time for them, and she knows he’s right. Apologetic, she heads off. Charles, however, calls her back and admits he’s never stopped loving her!

19. Sam is upset in the wake of recent events, fearing he might have lost Lydia for good.

20. Billy invites Meena for a day out to cheer her up, leaving Dawn incredibly jealous.

21. Ollie suggest Becky as an ally when Zara decides to protest against the Christmas light switch on due to her concerns about light pollution. Zara, however, is not so keen, given her feelings towards Becky. The protest gets underway, and Becky ultimately decides to take action, as she resorts to some DIY that gets her into deep trouble! Ollie, having heard about his new friend’s plight, runs off to rescue her. But he leaves dad Luke unattended! Becky brands Ollie her ‘hero,’ but Luke, however, has vanished without a trace.

22. After a night out with Scott, Damon is confronted by Sienna about his absence around the house. Her words seem to hit home as Damon is left questioning whether Liberty would be better off without him.

23.Martine and Felix return from their honeymoon, and Felix is brought back to reality as he finds Celeste concerned that Nate might have discovered something new. DeMarcus, meanwhile, skips school to hang out new pal Nate, much to Felix’s dismay. Felix, therefore, issues Nate with a warning to stay away. Nate, however, sets his sights on Martine, and she is subsequently questioned at the station. But why?

24. Marnie is not impressed when Donna-Marie brings a ‘little’ Christmas spirit to her café! But it appears as she might often to the idea, as she decides to have carol singers in her establishment.

25. Undercover cop Lexi showing Nate Denby a picture of their primary target, and it’s none other than Darren’s kidnapper Maya! It’s later revealed that Maya has a sinister connection to Fergus. The question is: just how are the two antagonists linked?