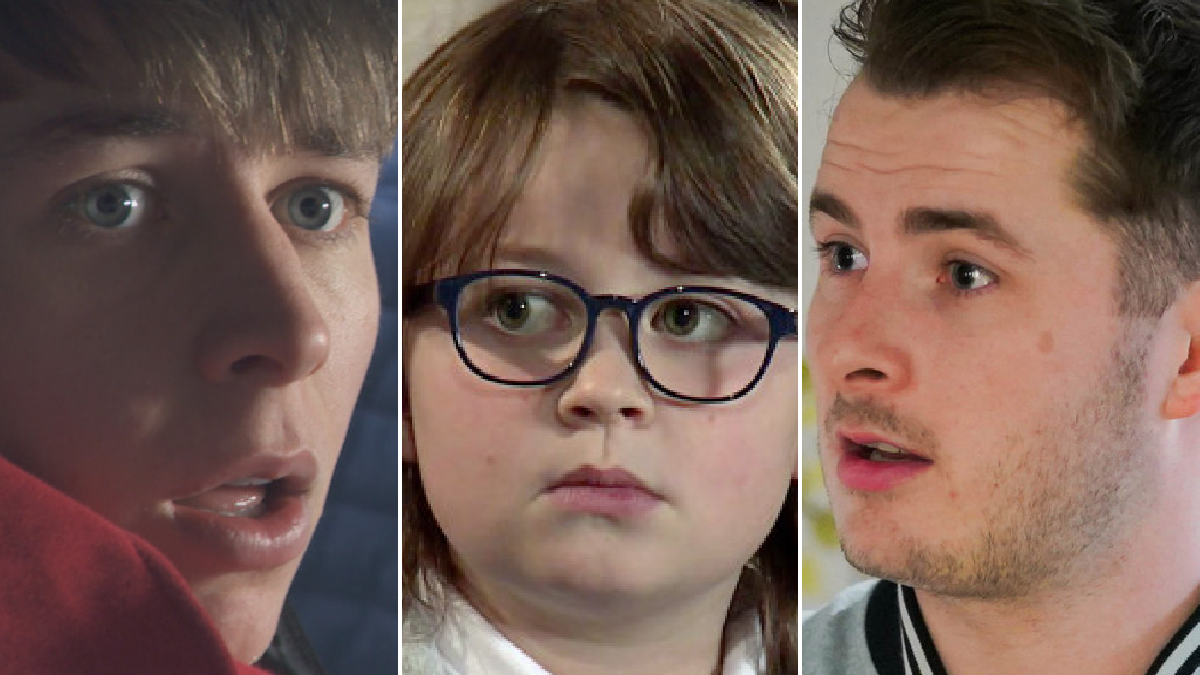 If you’re a fan of the soaps — and let’s be honest, who isn’t? — then the week ahead is certainly one you won’t want to miss.

Hollyoaks’ County Lines story reaches something of a dramatic peak, as Sid Sumner (Billy Price) takes drastic action in order to get a confession from Victor Brothers (Benjamin O’Mahony), but will it all go according to plan?

It does, in fact, transpire exactly as Sid hopes, but danger lurks around the corner, as Victor gets wind of what the young lad is up to — and a deadly showdown ensues as a result.

It’s not just Hollyoaks that sees the youths caught up in drugs drama, however, as Coronation Street’s Simon Barlow (Alex Bain) continues to get himself in deeper and deeper with the wrong crowd, and this week sees Nick Tilsley (Ben Price) and Leanne Battersby (Jane Danson) learn all about what he’s getting up to.

Ben Mitchell (Max Bowden) and Kheerat Panesar (Jaz Deol) seemingly join forces and meet with Stas in EastEnders, but when Stas doesn’t get what he wants when he wants it, a horrific showdown ensues.

And last but not least, Emmerdale favourite Charity Dingle (Emma Atkins) once again finds herself in a pickle, when she breaks into HOP in a desperate bid to make amends with Chas (Lucy Pargeter) — and ends up leaving Al Chapman (Michale Wildman) for dead.

If you simply cannot wait to see what’s ahead, then you’ve come to the right place, as we’ve selected just a few must-see moments from this week’s drama to whet your appetite!

Nick gets wind of the ordeal Sam went through while in Simon’s care, and thus he orders the young man to stay away from Sam, while Leanne confronts him with the packages of drugs. Simon reveals he’s been dealing drugs, as somebody has to put food on the table. Leanne finds both Jacob and Simon counting their drugs money. She objects, but Jacob makes a dig about her ‘dead son’. Leanne is livid, but as she tries to grab him, she smashes Oliver’s music box.

Deadly danger for Ben and Kheerat in EastEnders

Stas takes a swipe at Ben, revealing that he doesn’t trust him after learning the Mitchells have been badmouthing him. They wait for Vinny to arrive with the money, but when he doesn’t show up — side note: he’s cornered by a thief! — Stas gets impatient…

Desperate to prove herself to Chas and make amends once and for all, Charity decides to break into Hawksford in order to acquire a client’s contract. However, Al catches her red-handed!

Charity does her best to distract him, and fetches the trophy from his business award, and throws it in the air. Al leaps into the air in an effort to catch it, but he ultimately falls, and bangs his head, before dropping to the floor. Charity reels in the wake of what’s happened, and stares at Al — unsure of what to do for the best.

One to watch: Thursday March 4 at 7pm on ITV.

Sid is determined to get a confession from Victor, and spies an opportunity to do so when Victor leaves him alone in the car. He puts his plan into action, as he shakily plants a listening device in the glovebox — only to be caught by Ollie, who’s on the hunt for drugs. Sid promises he’ll get him some drugs later if he leaves. Ollie agrees, and Sid gets the confession he’s been looking for from Victor!

Everything has gone according to plan — that is, until Victor finds out that he’s been betrayed! Sid wastes little time in downloading the video evidence onto a USB stick to give to the police, but Victor smashes the front door in — hellbent on revenge! Peri frightened off the drugs boss, giving Sid long enough to escape, but he’s held up in the carpark but Luke, which allows Victor ample opportunity to close in on him.

Yasmeen has a meltdown in Coronation Street

Tim doesn’t want a penny of Geoff’s inheritance, and therefore asserts he will give everything to Yasmeen. With Tim’s money and the sale of the community centre, Yasmeen should be able to pay off the debts, but when she opens a County Court Judgement, she’s worried sick, and suffers a panic attack. She locks herself in No.6 and has a full meltdown — fearing she’s going back to prison.

Denise tells Jack all about what Chelsea is caught up in, and Jack is determined to go to the police. Chelsea, however, is desperate to locate the copper before he reports them. She finds him outside the station, and manages to convince him to allow her the chance to explain. She reminisces about their past and cheekily suggests they go back to his house.

Jamie is trapped by Gabby in Emmerdale

Jamie feels trapped, as Gabby plans to cook tea up at Home Farm. Meanwhile, Dawn is devastated when she learns that Gabby is pregnant, and she’s moved into Home Farm! Mack soon offers Jamie a suggestion in an effort to resolve his problems.

Verity receives an offer in Hollyoaks

Verity is trying to get pregnant, but Sami cannot take any more passion, and thus asks for Scott’s assistance — desperate to cool his partner off! Meanwhile, Verity is floored when she receives a dream job offer in New York.

Nina is floored by Asha’s love declaration in Coronation Street

Aadi discovers that Nina offered to mind the cafe to avoid having to attend Dev’s birthday party. He quizzes her about why she lied to Asha about being busy, and she reveals that she felt it was too soon to attend family gatherings. However, Nina later goes to the party — but she is left floored when Asha reveals she’s in love with her.

Stacey is feeling awful about the accident, and blames herself. She tells Martin she’s sorry about what happened. Martin later finds out that Kush and Stacey locked Ruby in the office to take a pregnancy test, and thus he punches Kush!