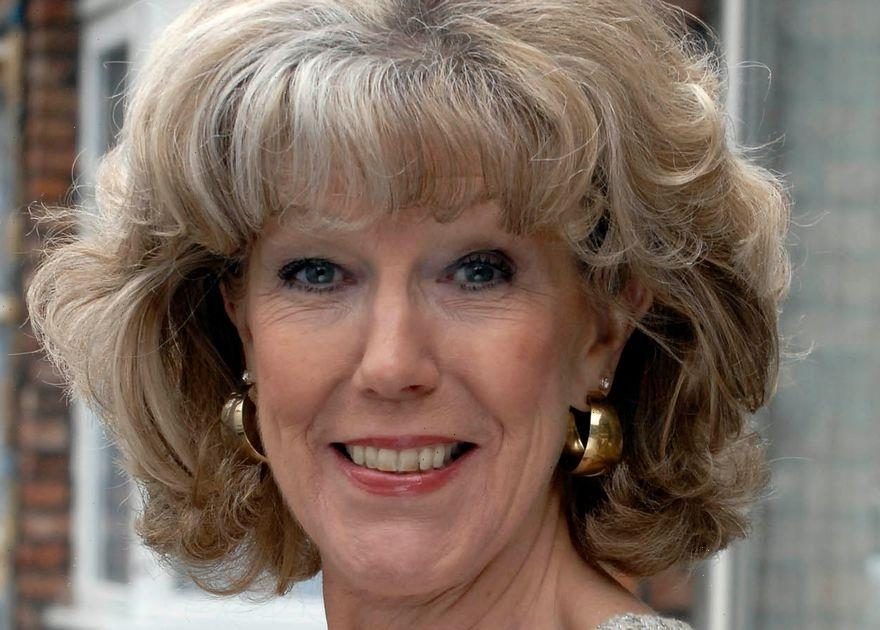 However, before she walked on the cobbles, where she starred alongside future husband Mark Eden, Nicholls had a secret singing career and gained her first soap role in the iconic Crossroads.

Born on November 23 1943 in Walsall, Staffordshire, Nicholls was the daughter of politician Lord Harmar Nicholls.

Harmar Nicholls was made a Baron in 1975, which automatically made Nicholls 'The Miss Honourable Harmour-Nicholls'.

She trained at the Royal Academy of Dramatic Arts (RADA) and gained her first acting role in the soap Crossroads in 1964, as Marilyn Gates.

In 1968, she released a song called Where will you be?, which reached number 17 in the UK Music Charts, and it is reported that she also sang in a cabaret club in Vienna when she was younger.

Nicholls became a regular on our tv screens, starring in The Rise and Fall of Reginald Perrin alongside Leonard Rossiter from 1976-1979, and as Nadia Popov in Rentaghost from 1981-1984.

However, Nicholls is best known for Coronation Street, where she has become one of the cobble's most beloved characters since she joined the soap in 1979 as Audrey.

Viewers have been through heartbreak and joy with Audrey, including her marriage to Alf Roberts in 1985 and his tragic death in 1999.

Most recently, Audrey also suffered a heart attack in the soap following a family argument, but recovered and has since returned to the cobbles.

Her own life was also saved by a Coronation Street viewer in 2011, who spotted that the actress had skin cancer.

Anna Bianconi-Moore, a nurse at Addenbrooke's Hospital in Cambridge, was watching the programme when she noticed that Nicholls had a small mole on her shoulder.

After contacting the Coronation Street team, Nicholls was referred to a skin cancer specialist and diagnosed with malignant melanoma. Following her diagnosis, the mole was removed.

The nurse was invited to meet Nicholls on set following her life saving intervention.

Nicholls also starred alongside her late husband Mark Eden on the cobbles in the 1980s, when he played Alan Bradley.

Eden left the soap after the character was hit by a tram 1989.

Nicholls and Eden had met at a friend's barbecue, where Eden had asked for her number.

She recalled how he had made her laugh, and the couple had their first date at the barbecue of another friend.

They moved in together in 1984 and married in 1993, with Nicholl's saying in an interview with the Mirror Online that "we're soulmates."

Talking about their relationship in the interview, Nicholls said, "We’re not sweetness and light all the time – that would be horrendous.

“But Mark is very romantic. He plays the piano, so we have a sing – possibly after a couple of glasses of wine.

Eden was diagnosed with Alzheimer's disease and was hospitalised in November 2020. He sadly passed away on January 1 2021.

Coronation Street airs Monday, Wednesday and Friday on ITV at 7.30pm and 8.30pm