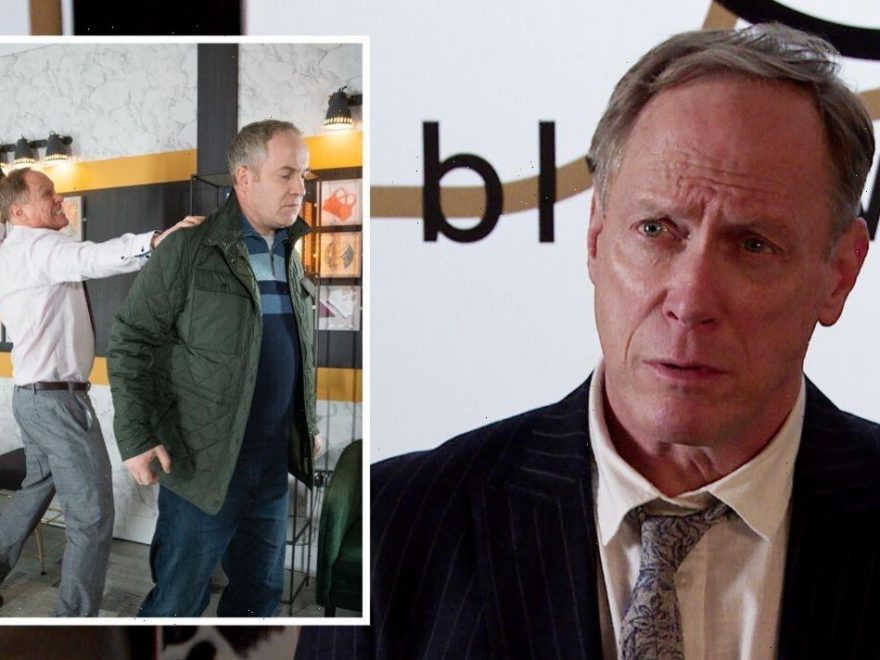 On Friday night’s Coronation Street, Stephen (played by Todd Boyce) struck Teddy (Grant Burgin) over the head with a hole punch after the murder of Leo (Joe Frost) was about to be exposed. Stephen has now two bodies on his kill count, which Todd Boyce claimed was a shock when he found out the dark path his character was about to go down.

As Teddy stormed towards Stephen outside of Underworld, Stephen managed to get him back inside so they could talk.

He expressed to an angry Teddy: “Would you like a whiskey?” however, he wasn’t impressed and replied: “No, I want answers, what have you done to my son?”

Stephen explained: “I haven’t done anything to Leo, but I did lie about you seeing him in Canada.

“I wanted you to have closure. Everything I said before still stands, he doesn’t care about you, he ignores your messages and I was hoping to spare you more heartache.”

However, Teddy didn’t believe what he was being told and exclaimed: “No, no, I don’t like this anymore!

“The text I got from him was sent from here, why would he say he was in Canada if he wasn’t it doesn’t make any sense!

“So, I think someone else sent it. I think that someone else has to be you…” to which Stephen continued to lie: “Why would I text pretending to Leo?”

Teddy quipped: “Because you wanted me to think that he had gone to Canada and all the other lies you have told me, not to go back, not to try and find him because you know he is not there!”

Stephen tried to calm him down and claim he was talking “nonsense”, but Teddy stood firm: “I don’t think it is.

“I think, that you got rid of my son to get your claws into Jenny [Connor],” to which Stephen added: “This is ridiculous.

“I know there was a bit of friction between us, but do you honestly think I would harm him in any way?.”

Fuming, Teddy shouted: “Liar!! You are a liar, I think you killed Leo and I am going to prove it! Let’s see what the police have to say.

“Look at you, you’re panicking and I can see it, I am going to the police and there is nothing you can do to stop me.”

However, before he could make it out of the office, Teddy struck Stephen over the head and realised he had killed him.

Speaking to Express.co.uk and other press, Todd admitted that he was surprised when he was told he would be a serial killer.

He said: “In March, the very start of May, Iain McLeod and I, we sat down on a Zoom and I had no clue I was going to be a murderer.

“There was a nice period of time that they checked my availability for and I think the blood probably drained from my face when he said, ‘You are going to be a murderer’.

“And then I thought, ‘Oh my god I am going to be a baddy’, then the blood came back to my face and I thought this is going to be amazing, and he kindly wanted to see if that was ok with me.

“Then he said there will be another murder at some point and that has come sooner than I expected.

“I have stopped asking about what is going to happen to me because it is exciting not knowing actually, it’s through the grapevine and it is such a wonderful place to work.”