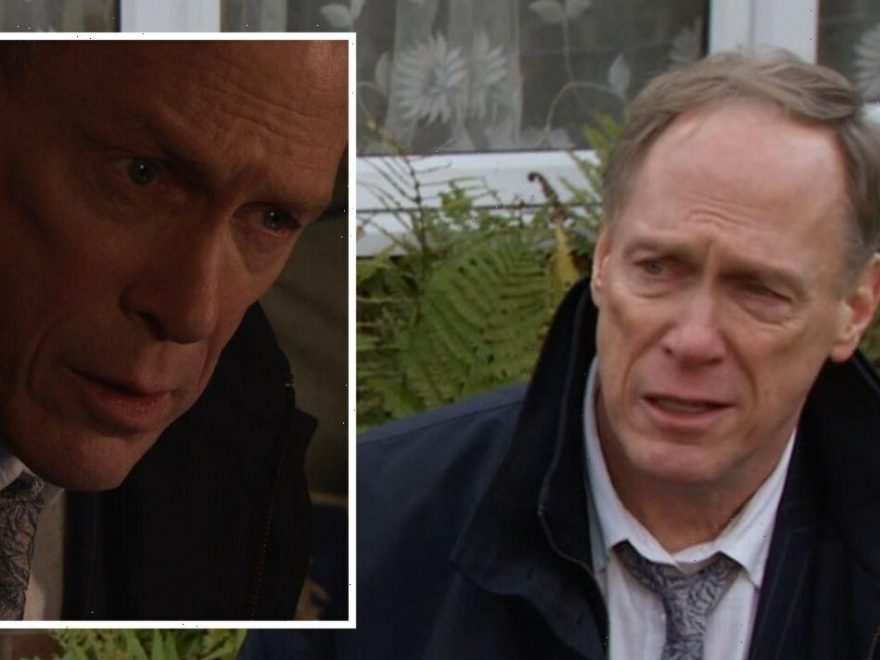 Coronation Street’s Stephen Reid (played by Todd Boyce) dumped Teddy Thompkins’ (Grant Burgin) body in a lake tonight, after hiding him in the roof box of Audrey Roberts’ (Sue Nicholls) car. However, eagle-eyed fans are sure they have worked out Stephen’s downfall as they pointed out an “obvious” plothole.

During tonight’s episode, Stephen desperately tried to get rid of the body which he had hidden in Audrey’s car box.

Audrey had taken off for a night away with her friends, leaving Stephen to panic that she would find Teddy’s body on top of her car.

Sitting in the cafe, Stephen continued to ring his mother’s phone until Nick Tilsley (Ben Price) walked in and revealed she had broken down and was waiting for Kevin Webster (Michael Le Vell) to bring her home.

After she arrived back in Weatherfield, Stephen was eager to get out of the factory to dispose of the body.

Outside, he bumped into Sarah Platt (Tina O’Brien) who reminded him of the CCTV which was scattered across the factory and would have caught Stephen in the act.

Another close call for Stephen entailed after Carla Connor (Alison King) caught him huddled around the computer and began to get suspicious.

Taking the chance before he was called away to do something else, Stephen hopped into the car but was soon met with another obstacle course, the car had run out of petrol.

David Platt (Jack P Shepherd) was adamant he needed the car and the roof box to get some wood chippings from the garden centre.

Later, Sarah was desperate to find her uncle after she thought he had lost his job after Carla found out she had used the factory belongings without her there.

When walking into the back room of the Rovers Return, Stephen thought his time was up and that David had found Teddy’s body on top of the car.

However, Sarah admitted that by the time David got to the garden centre, the wood chippings had sold out and didn’t need the roof box after all.

A wave of relief came over Stephen as he desperately dashed out of the Rovers to finally dispose of Teddy’s body.

In a secluded area, he pulled the box off the car and added a few extra stones into it before plunging it into the river.

Panic began to set in once again as the box floated on top of the water, rather than sinking to the bottom as he had hoped.

Looking around, he noticed a man walking towards him with his dog, but luck was on the villain’s side as the box sank to the bottom of the river just in time.

He had finally gotten rid of Teddy, but how long will he be able to keep his secrets under wraps as Carla has become suspicious of his recent actions?

Fans of the ITV soap were left “in tears” from the blunder, as they pointed out that he should have known the box would float.

Rick Poppa teased on Twitter: “Ever get that sinking feeling? #coronationstreet #corrie.”

Mike pointed out: “Cos no one’s gonna ask what happened to his roof box. #coronationstreet.” (sic)

@Wee_Westie29 commented: ” That’s not going to stay under for very long, Stephen is now on borrowed time and the clock is ticking. #Corrie #CoronationStreet.”

Jack asked: “Why would he think that would sink #Corrie #CoronationStreet.”

Dan Lewis probed: “His face when that box started to float. Poor man can’t do f**k all right #Corrie #CoronationStreet.”