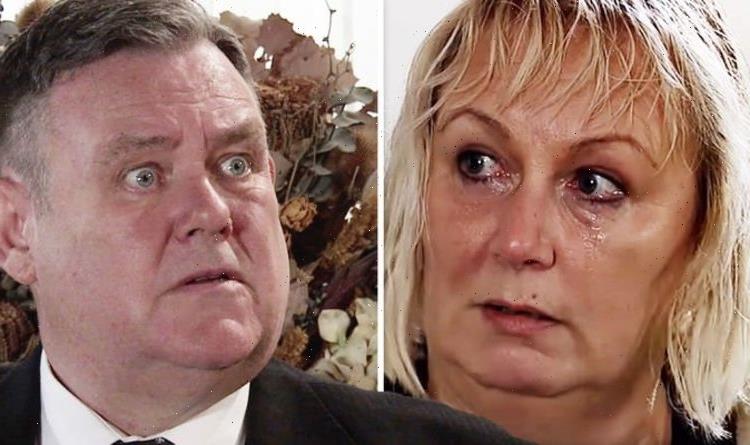 George Shuttleworth (played by Tony Maudsley) has stood by his employee Todd Grimshaw (Gareth Pierce) despite everyone else on Coronation Street turning their backs on him. However, will he be forced to flee the cobbles with Todd makes an alarming discovery at the funeral parlour that will rock his mum Eileen Grimshaw (Sue Cleaver)?

In upcoming ITV scenes, Todd is keen to show his gratitude to George for standing by him.

The disgraced resident wastes no time in getting back to work and figuring out how he can repay his boss.

Todd decides to clear out the storeroom at the undertakers but he isn’t prepared for what he finds.

George tries to hide his uneasiness at Todd’s plan and attempts to discourage him from helping.

However, Todd doesn’t pick up on George’s hesitancy and goes ahead with the tidying up.

The undertaker is horrified when he discovers Pat Phelan’s (Connor McIntyre) ashes in the cupboard.

George is mortified and admits he’s had a hold of them for some time.

He explains he could never find the right time to tell Eileen about them.

Will Todd stand by George for supporting him and keep his secret?

Or will issue the undertaker an ultimatum and demand he tells Eileen the truth?

Eileen was married to the serial killer at the time of his death and the unlucky-in-love resident has tried relentlessly to put the past behind her.

The mum-of-two won’t be pleased when she realises George has been keeping this secret from her for some time.

DON’T MISS
GMB boss steps down after 13 years as he moves away from ITV [INSIGHT]
Our Yorkshire Farm: Amanda Owen on why Ravenseat will always be home [INTERVIEW]
EastEnders reunion for Stacey Slater and Martin Fowler? [SPOILER]

Coronation Street viewers have been enjoying George and Eileen getting to know each other but that could be set to change.

Will George fall on his sword and flee Weatherfield in a bid to keep Todd quiet and prevent Eileen from having to relive the past?

One ITV fan remarked: “Hahaha oh, I wish Phelan was back I miss him, one of my fave villains!”

“I do wish you wouldn’t ‘tease’ like that. For a second there, I thought the brilliant @connor9mcintyre

might be making an unexpected return… Still, perhaps nice guy #MattPhelan could call round to collect his twin’s ashes? #Phelan #Corrie,” another wrote.

A third shared: “So he’s been in the ashes on the street all this time and no one knew.”

“He was a great baddie. Good way of getting him back,” someone else added.

Coronation Street airs on ITV on Mondays, Wednesdays and Fridays at 7.30pm.