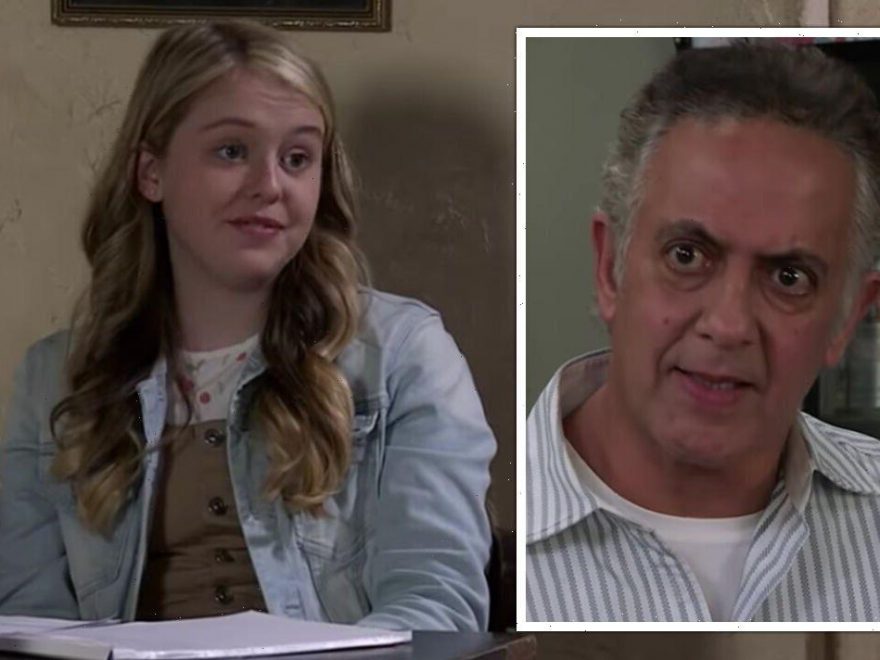 Aadi Alahan (played by Adam Hussain) is set to risk his own future by covering for his crush Summer Spellman (Harriet Bibby) on Coronation Street. After a difficult few weeks, Summer has been struggling to cope with the pressure of exams. ITV soap spoilers have revealed Aadi will offer her his set of homemade revision cards, but will she throw him under the bus when she’s accused of cheating?

The drama unfolds when Summer informs Asha  (Tanisha Gorey) the exam board is still looking into her appeal and it is up to her whether or not she chooses to sit her final exam.

In order to get her mind off it all she goes out for lunch with soap newcomer Aaron but she is left overcome when Aadi calls with a series of homemade revision cards to help her.

Later, Summer is taken aback when Mary Taylor (Patti Clare) reveals a surprise party is being held for her to celebrate the end of her exams.

Later on, in the exam hall, Summer unzips her blood sugar testing kit to reveal Aadi’s revision cards hidden inside.

When the invigilator heads over, Summer panics and pretends she needs to test her sugar levels.

Outside of the hall, she opens the bag and is filled with dread when she realised the cards are missing.

Meanwhile, the invigilator discovers the revision notes scattered on the floor.

He recognised the handwriting as Aadi’s and bundles him out of the exam.

After the exam is over, Summer tries to head off home but she can hear the headteacher scolding Aadi for cheating.

Will Summer own up to the headteacher and explain how Aadi was not the person intending on cheating?

Both Summer and Aadi are later called to attend a meeting at school to discuss the incident.

Convinced his son is covering for Summer, Dev (Jimmi Harkishin) reveals Summer has a new love interest and stresses there is no reason to protect

He’s gutted that Summer is seeing someone else, so will he change his story?

If Summer refuses to take ownership of the scandal, Aadi’s future could be ruined as he might be expelled.

Dev is bound to be left furious if Summer does not come clean, so will he intervene to prove his son’s innocence?

Will Dev find a way to get revenge on Summer in order to ruin her future career prospects?

Earlier this year, Coronation Street boss Iain MacLeod said Summer’s story “is going to be one of our most important stories” of 2022.

“It’s going to be very long-running, nuanced and heartbreaking to watch this incredibly promising young woman disintegrate,” he explained.

“But in the best tradition of our storytelling, it will have a redemptive ending.”

Coronation Street airs on Mondays, Wednesdays and Fridays at 8pm on ITV.