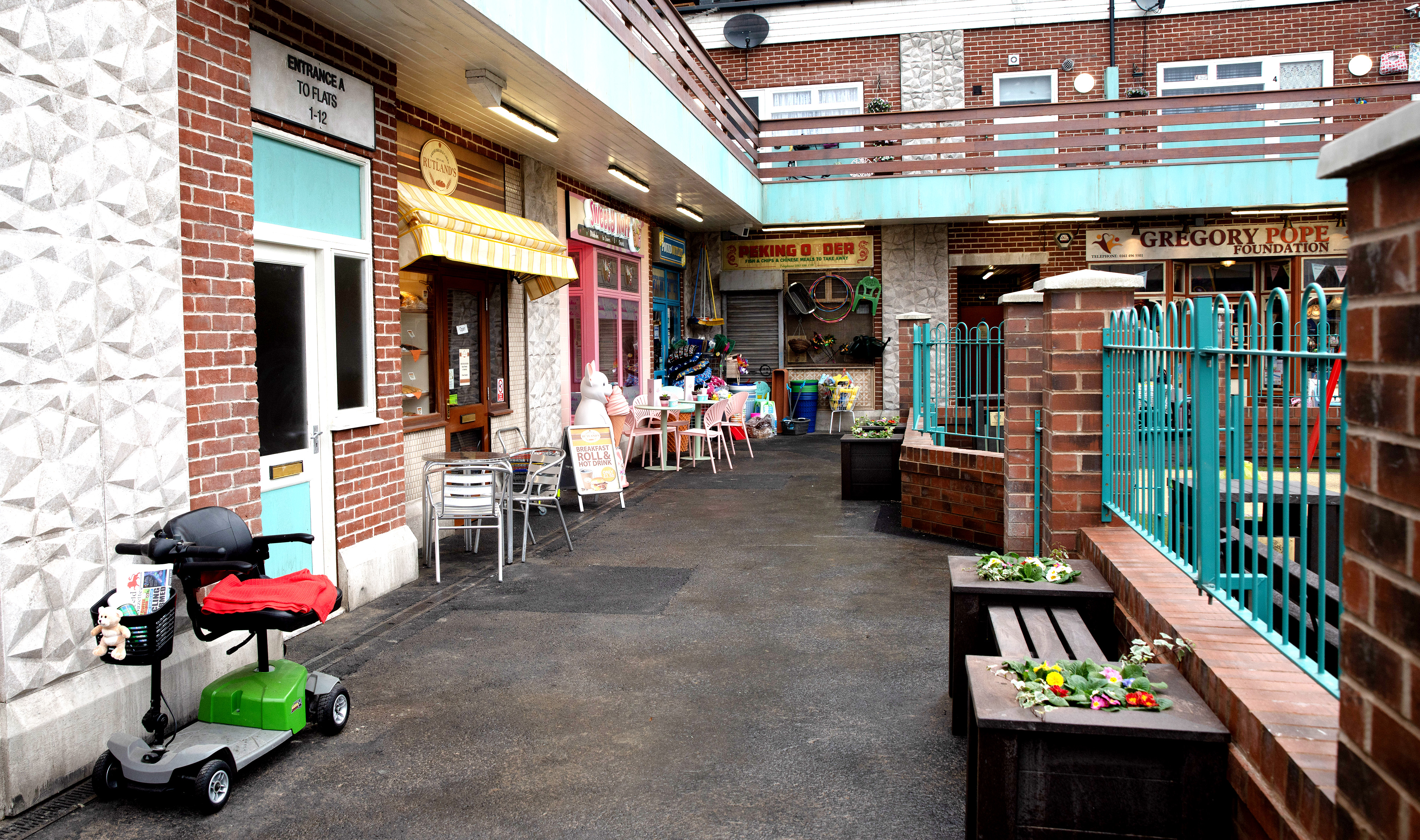 9 months on from the first announcement, Coronation Street has today unveiled the brand new Weatherfield Precinct.

The much-mentioned precinct has been visited by the residents for decades and next month, viewers will be able to take trips to the shopping centre with their favourite characters.

As part of the wider community, the precinct has often cropped up in dialogue with characters heading off to the shops, or the likes of Dylan (Liam McCheyne) mentioning he has friends from there.

The brand new set will allow scriptwriters the chance to make the most of the show’s broadening horizons and create storylines beyond the Corrie cobbles.

Created by the Corrie Design and Construction teams, the new set has been cleverly aged to make it seem as though it’s been there for ages. The range of shops chosen accurately represent the many similar 1960s precincts in towns and cities across the UK.

The two-storey construction features maisonettes, a staircase and balcony, a piazza and array of accessible shops and units – including a charity shop which will be one of the first sets to provide a new workplace for Roy (David Neilson) and Evelyn (Maureen Lipman) – who will volunteer their services.

There is also a children’s park and play area with swings and a roundabout adds extra scope for filming away from the cobbles.

The first scene will be filmed next week, 9 months since building work started on the new exterior set and will air on January 13.

Producer Iain MacLeod said: ‘Hats off to our design and construction teams who have conjured a totally convincing new precinct for our drama! They took their inspiration from Salford’s many real-world, late 20th century shopping areas and what they have created is a brilliant, characterful space to tell a diverse range of stories. Expect to see teens hanging out at the dessert shop, families enjoying the play area and, after dark, a rogues’ gallery, up to shady business in the ginnels. I am really excited by the arrival on screen of this much discussed but never seen corner of the Weatherfield universe.’

Head of Design Rosie Mullins explained the process: ‘Back in 2013 Coronation Street moved into its new home at Media City. With this move came exciting potential to continue to develop and expand our Weatherfield Community onsite. The first expansion came in the form of Victoria Street and Weatherfield Police Station builds back in 2018.

‘In February 2021 I set about the first pencil drawings for a very exciting new exterior build – Weatherfield Precinct. We have often heard about this precinct and although we have filmed over the years at a range of shopping locations, we had never established our own Weatherfield Precinct. It had always intrigued me – what would it look like and who would we find there? The opportunity to bring to life a colourful and grittier area of Weatherfield was so exciting!

‘This build has been one of the most enjoyable builds that we have undertaken and showcases the many behind the scenes talents that the programme has to offer’, Rosie said.

‘I am incredibly proud of the detail, the quality of the build and for what it offers for future storytelling for the show. I am also so very proud of how it was brought to life by our in-house talented Design Team. The team worked tirelessly in the not so glorious Weatherfield weather on a 9 month build which was led by myself and Keith Eccleston Construction Manager and with incredible Art Direction & design from Rosie Jones.’

‘A brilliant dedicated team of joiners led onsite by Rick Ellacott and Martin Broadbent. Bringing the build to life has involved our Painters and Scenic Artists and their skill and magic. The captivating visual ident of Graphics were provided by Lynsey Phillips and an amazing array of authentic & characterful set dressings sourced by buyer Jess Williams.

‘The soap’s Prop Dressing team have done a fantastically detailed job of bringing the businesses and the building itself to life.

‘The team worked alongside our clever Electricians who have installed an ambient and authentic lighting that complements the build perfectly.’

AMAZING FACTS ABOUT THE WEATHERFIELD PRECINCT