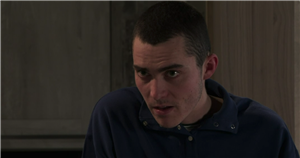 Coronation Street viewers were left jumping for joy on Monday night as Corey Brent and Kelly Neelan were arrested for their involvement in Seb Franklin and Nina Lucas' attack.

The couple were horrifically attacked by Corey and his gang when out for a stroll last week.

Doctors were hopeful that Seb would recover, but he took a turn for the worse and he passed away in upsetting scenes on Friday.

The news of Seb's death devastated Weatherfield residents during Monday's episode and police began their investigation.

Following a chat with Nina, Seb and Kelly were both arrested by police officers.

Despite being told by Corey to lie to the police, Asha turned against her boyfriend and told the copper the truth.

Taking to Twitter, one fan penned: "Corey and Kelly have been arrested now #Itv see this through to the rightful conclusion with lengthy prison sentences."

Another added: "Well done Asha for telling the truth."

A third person posted: "Yay, Corey arrested for the assault and murder."

While a fourth social media user said: "Yes Corey and Kelly got caught."

While some were overjoyed with Corey's comeuppance, others were left petrified for Asha's welfare.

One fan tweeted: "Asha needs to leave that flat now – Corey is the type who will make her pay for not lying for him."

Another person wrote: "Didn’t think Asha would’ve told the truth that she wasn’t with Corey hope she gets some sort of protection from him and he doesn’t get to her."

A third person posted: "Hope Asha will be ok."

Corey was horrified to hear about Seb's demise at the start of the episode and pleaded with Asha to provide him with an alibi, as the police would no doubt be asking questions now.

Asha was conflicted, but after speaking to Amy Barlow (Elle Mulvaney), who she was really with at the time of the assault, she started to display doubts about her boyfriend’s innocence.

It was a conversation with Nina, however, that ultimately made up her mind, and when the police came calling – Asha refused to provide Corey with an alibi.

Will Corey get what he deserves?

Coronation Street airs Mondays, Wednesdays and Fridays on ITV at 7.30pm and 8.30pm