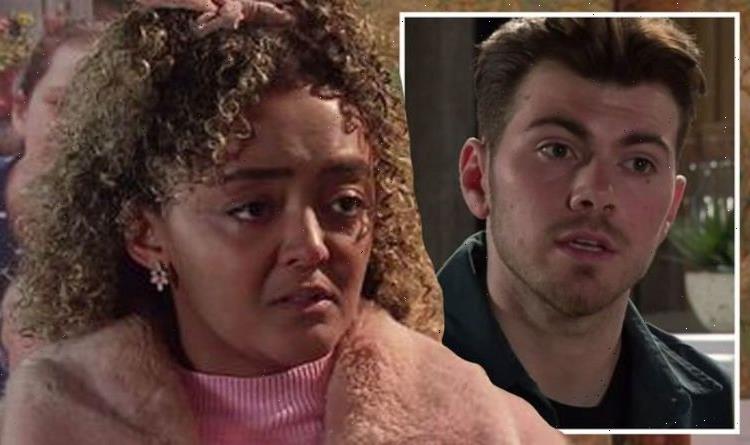 Emma (played by Alexandra Mardell) thought she had found the love of her life when she met Curtis (Sam Retford) on Coronation Street earlier this year and she was heartbroken to discover the cobbles heartthrob had an incurable heart condition. In recent weeks on the ITV soap, she discovered he had in fact been lying to her as he is actually suffering from a mental health condition called factitious disorder. However, now knowing she is marrying a liar, the Rovers Return barmaid could look to one of her neighbours for comfort in the lead up to the wedding.

In an action-packed week of episodes, Emma will be doubting whether she can go through with the wedding after a talk with her sister, Amy Barlow (Elle Mulvaney), about her partner’s lies.

At the same time, Curtis will be booking flights to leave the country and therefore leave his bride-to-be at the altar, unable to face up to the reality of the situation.

However, as the barmaid tries to look for support over her relationship troubles, she could bump into neighbour Ryan Connor (Ryan Prescott).

The heartthrob’s own romance with Alya Nazir (Sair Khan) came to an end earlier this year when he lied to her about things he was doing behind her back.

As the two characters talk, they could realise they have more in common than they ever thought and this could lead to them sleeping together.

Steve McDonald’s (Simon Gregson) daughter could immediately regret her moment of passion with Ryan as she is set to marry Curtis the same day.

She could race to the altar to meet her Prince Charming, hoping Curtis will never find out about her betrayal and they can have a long and happy life together.

Unfortunately, if he doesn’t turn up, having fled the country with Steve’s charity money, she could be looking for someone to support her through her heartbreak.

Having slept with Ryan, she could tell him she doesn’t want a relationship but she wants someone to listen to her and comfort her.

Knowing he needs to love Alya, but wanting to help Emma through this rough patch, the heartthrob could put his own affairs of the heart to the side.

Speaking about the wedding day drama and how Emma is feeling about her relationship with Curtis, the actress who plays her, Alexandra, hinted a new romance could be on the cards.

The soap star told Express.co.uk and other publications the advice she would give her alter-ego and said she would urge Emma to “stay single”.

Alexandra explained: “She needs to focus on herself for a bit. There’s that saying where when you’re not looking for love, that’s when you’ll find it.

“Maybe she just needs to properly focus on herself, take a step back. There might even be somebody closer to home that she’s not even thought about.”

With this in mind, it wouldn’t be impossible for Emma to end up sleeping with Ryan and possibly falling in love with him.

However, Alexandra added her character needs to “just let things settle”, as she added: “Focus on yourself and then someone might pop along who’s actually perfect.”

The actress also spoke about some of her character’s other relationship endeavours, stating: “David [Platt] was definitely a big mistake.

“It was such a shame with Chesney [Brown] because that was a lovely relationship they kind of built but at the end of the day, Gemma [Winter] and Chesney were meant to be.

“Very similarly with Seb [Franklin], there was a lot of potential but there is just always another lovely lady, isn’t there?

“I do actually think, ultimately, Curtis is Emma’s Prince Charming. There’s just this big thing she needs to sort out but at the end of the day, I do think they are a good match.”

Unfortunately, his lies have created a huge problem for the couple and Alexandra explained: “Emma is devastated.

“Curtis is her everything at this point and he is the prince that she has been looking for and it’s just so typical in true Emma romance that there is something which is going to go wrong.

“And it’s just such a shame because this is the one, she knows this is the one and she’s devastated and I think she’s just willing to do anything to try and make it work.”

Alexandra also admitted she did not think her alter-ego should necessarily continue her relationship with her husband-to-be.

However, she admitted her quirky character is really happy with him so if the wedding does go ahead, will she commit herself to him and never betray him?

Explaining some of his character’s behaviour, the actor who plays Curtis, Sam, spoke with Express.co.uk and other press about what makes the youngster tick.

The soap star said: “What he doesn’t realise is that he’s built an authentic unconditionally relationship with this person who is beautifully willing to turn around and help him on this journey.

“He reacts with his instinct, it’s not conscious but subconscious to lie his way out of it and try to keep up appearances and grasp on to his safety net.

“You imagine for 22 years of his life doing this habit, to let go of something like that in an instant is impossible.

“But Emma grasps on to it. She sits there, and she says she’ll take his lies and breaks him down to the point where he feels able enough to be honest with her.”

But will they get their happy-ever-after?

Coronation Street airs Mondays, Wednesdays and Fridays at 7:30pm and 8:30pm on ITV.