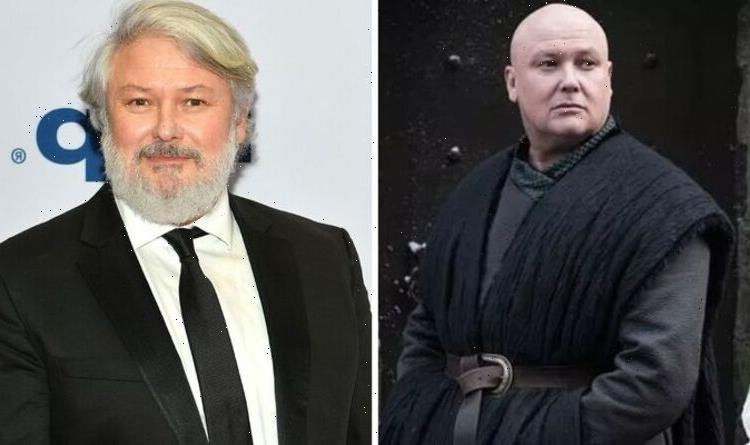 Conleth Hill will make his debut in the ITV series Holding on Monday night, where he will play the lead role of local police officer Sergeant PJ Collins. The four-part series, which will run every Monday for four weeks, is based on Graham Norton’s novel of the same name.

Conleth is best known for his role as Lord Varys in the hit HBO series, Game of Thrones.

However, speaking in a new interview, the actor admitted that his casting in Holding was the best job he’s ever landed.

He went on to explain that up until now, he has always been called “Conleth Hill, the Game of Thrones [star].

“But that’s a small price to pay for being associated with something so brilliant,” the 57-year-old said.

He continued: “And I’m not gonna deny it or say, ‘Well, no, I’m onto something else now’. I’ll always be associated with it until they do a remake.”

Speaking about his new role as a police officer, Conleth added to Radio Times: “I just thought he was a really multifaceted character, but [with] none of the kind of cliches that you’d expect from a leading detective.

“So it was just a gift, and the best part I’ve ever been offered.”

When asked whether his role as Sergeant PJ Collins was better than Varys, Conleth admitted it was “different”.

Conleth said he loved playing the part of Varys in Game of Thrones, although he pointed out he was only a supporting character.

The first episode of Holding will see Sergeant PJ Collins solving his first-ever murder case after human remains were found in a sleepy Irish village.

However, as the gruesome discovery ripples through the community, it threatens to expose a lifetime of secrets.

The new ITV drama is based on Graham Norton’s novels and was directed by Kathy Burke.

Speaking about his novel being transformed into a series, Graham began: “I am beyond excited to see the story and characters I created being brought to the screen.”

He continued: “I love how the brilliant creative team have transformed my novel into something so rich and dramatic. West Cork is ready for its close-up.”

Kathy added: “2021 is my 40th year working in the industry and I can’t think of a better way to celebrate than directing Holding.

“It’s a beautiful piece of writing with a great story and fantastic, full-bodied characters.

“All this with glorious West Cork as its setting proved irresistible.”

Holding airs on Monday at 9pm on ITV.